Windies Behind in India Series Again After Seven-Wicket Loss

BASSETERRE, St Kitts – West Indies failed to repeat their exploits of 24 hours earlier and slumped to a seven-wicket loss to India in the third Twenty20 International at Warner Park. 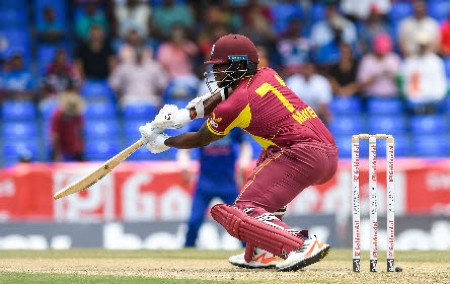 Left-hander Kyle Mayers hits through the off side during his top score of 73 on Tuesday. (Photo courtesy CWI Media)Energized by their series-levelling win on Monday, the Caribbean side were brought back down to earth, as they mustered only 164 for five off their 20 overs here Tuesday, and then watched as Suryakumar Yadav punched 76 from 44 deliveries to give the visitors a 2-1 lead in the five-match series.

Captain Rohit Sharma succumbed to injury in the second over but his opening partner Suryakumar steered the run chase brilliantly, lashing eight fours and four sixes before Rishabh Pant arrived late to stroke an unbeaten 33 off 26 balls, putting India over the line with an over to spare.

“At the [halfway stage of the game] we felt like we had enough. India bowled well … they used the pitch really good.

“The wicket was a bit on the slower side and we felt it would be difficult to keep scoring on it. Again, if we had gotten early wickets it would have been a different game.”

Left-hander Kyle Mayers top-scored with 73 off 50 deliveries after West Indies were sent in, putting on 57 for the first wicket with Brandon King (20) and a further 50 for the second wicket with Pooran who made 22.

Mayers reached his second T20I half-century in the 13th over by pulling off-spinner Ravi Ashwin over mid-wicket for six, before perishing in the 17th over, top-edging a heave at seamer Bhuvneshwar Kumar for wicketkeeper Pant to complete an easy catch.

Rovman Powell (23) and Shimron Hetmyer (22) then provided the finishing touches in a 34-run, fourth wicket stand.

The sight of the dangerous Rohit hobbling off early in the run chase for 11 immediately after smashing a six and a four off fast bowler Alzarri Joseph, would have been a welcome sight for the home side.

However, Suryakumar put the game beyond West Indies in a dashing innings as he extended India’s first wicket stand to 105 with Shreyas Iyer (24) before putting on a further 30 for the second wicket with Pant who counted three fours and six.

“How we bowled in the middle overs was very, very crucial because they were just about to get that big partnership with a few of their experienced players batting in the middle,” Rohit said.

“And then how we chased the runs, I thought it was quite clinical. When you’re watching it from the outside, you felt there weren’t too much risks that we were taking.”

The final two matches of the series will be staged at the Central Broward Park Stadium in Florida next weekend.