The Windies defeated Sri Lanka by four wickets in the opening Twenty20 International at Coolidge Cricket Ground in Antigua on Wednesday, Mar. 3, 2021. 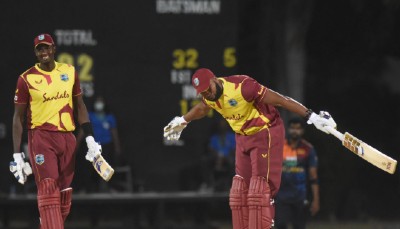 Kieron Pollard takes a bow as Jason Holder looks on after hitting six sixes in one over against Sri Lanka on Wednesday night, March 3, 2021. (Photo: CWI Media/Philip Spooner/CMC)Captain Kieron Pollard smashed six sixes in an over for only the third time in Twenty20 Internationals to counter leg-spinner Akila Dananjaya’s sensational hat-trick, as West Indies held their nerve in a chaotic run chase to beat Sri Lanka by four wickets.

Chasing a modest 132 for victory in the opening match at Coolidge Cricket Ground, West Indies raced to 52 off the first 19 deliveries courtesy of some awesome power-hitting from openers Evin Lewis (28) and Lendl Simmons (26).

However, the drama unfolded when Dananjaya (3-62) removed Lewis, Chris Gayle (0) and Nicholas Pooran (0) in quick succession in the fourth over to claim his hat-trick.

Pollard responded almost immediately, arriving at the crease to punish Dananjaya with six massive sixes in the sixth over, en route to an 11-ball 38 which helped West Indies regain their balance.

Even more drama erupted in the next over when Pollard was one of two wickets to fall off consecutive deliveries to leave leg-spinner Hasaranga de Silva (3-12) on a hat-trick, and West Indies stuttering again on 101 for six.

That was not the end of the tumult either as Jason Holder (29 not out) was then dropped in the deep on nine off Dananjaya and Dwayne Bravo (four not out) missed by the bowler a couple deliveries later, before West Indies gathered themselves to win comfortably in the 14th over.

“It was a bizarre game,” a relieved Pollard said afterwards.