NORTH SOUND, Antigua – West Indies produced a stellar exhibition of seam bowling to bundle Bangladesh out cheaply, and then made a steady, albeit sluggish reply, as they dominated the opening day of the first Test here Thursday. 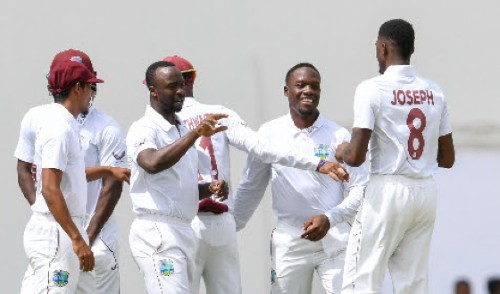 Fast bowler Alzarri Joseph (right) is congratulated by teammates after taking another wicket on Thursday. (Photo courtesy CWI Media)Taking advantage of a friendly surface after choosing to bowl first at the Vivian Richards Cricket Stadium, West Indies sent the tourists tumbling for 103 all out, 40 minutes after lunch, before grinding their way to 95 for two at the close.

Phlegmatic captain and opener Kraigg Brathwaite was unbeaten on 42 off 149 balls with four fours and accompanied by Nkrumah Bonner on 12, the pair having labored over a 23-run, unbroken third wicket stand.

Left-handed opener John Campbell chipped in with an uncharacteristically reserved 24 which required 72 deliveries and included a four and a six.

Captain Shakib-al-Hasan counter-attacked in top-scoring with 51 off 67 deliveries but was one of four wickets to fall after lunch, after Bangladesh found themselves tottering at the break on 76 for six.

“The guys adjusted well. Obviously it’s a pretty tough pitch to bowl on in terms of finding your length,” Roach said afterwards.

“It was very slow at the beginning so obviously you wanted to be a little bit fuller. There were some grass patches there and some ridges that we tried to hit and I think we did that pretty well.

“Shakib played well for his fifty but I thought overall, the bowling group did a good job.”

Roach, a late addition to the squad after passing a fitness test on Wednesday, set the tone for the morning, knocking over opener Mahmudul Hasan Joy and Najmul Hossain both without scoring to leave Bangladesh on three for two in the third over.

Mahmudul sparred at the second ball of the game and was caught by Bonner diving to his right at gully and left-handed Najmul pushed forward tentatively and lost his off stump.

Seales, who only arrived this week from the one-day tour of Pakistan, then rammed home the advantage when he got left-hander Mominul Haque to edge to Jermaine Blackwood at second slip also without scoring.

Veteran opener Tamim Iqbal resisted with 29 off 43 balls including four fours, adding 25 for the fourth wicket with Liton Das (12) to carry the innings to drinks at 41 for three.

However, Tamim perished in the first over after the resumption, feathering a leg side catch to wicketkeeper Joshua Da Silva off Joseph, the first of four catches for the Trinidadian gloveman.

Mayers, also fresh from the tour of Pakistan, struck twice in his first over to account for Das and Nurul Hasan (0) and plunge the Bangladesh innings into further strife at 45 for six.

First, he got Das to play down the wrong line and edge behind to Da Silva and two balls later, watched as Nurul shouldered arms to one that came back enough for an lbw judgement.

With wickets tumbling, Shakib threw caution to the wind, lashing half-dozen fours and a six in nearly an hour-and-a-half at the crease.

Crucially, he put on 32 for the seventh wicket with Mehidy Hasan Miraz (2) in a stand which saw his side to lunch without further loss.

Hopes of a late revival were dashed afterwards as Seales and Joseph combined to rout the tail. Seales claimed Mehidy via a leg-side catch to Da Silva in the first over after the break before also sending back Mustafizur Rahman (0) edging behind.

The left-handed Shakib struck a few lusty blows before holing out to Roach at long on off Joseph who grabbed the final wicket of Khaled Ahmed without scoring in the same over, caught low down by Bonner in the cordon.

Searching for a sound start, West Indies crawled to tea on 15 without loss but lost Campbell 45 minutes afterwards, playing on to Mustafizur after he had put on 44 with Brathwaite.

Left-hander Raymon Reifer, playing only his second Test five years after making his debut, made 11 before nicking a peach from seamer Ebadot Hussain behind.