ST GEORGE’S, Grenada – Captain Kraigg Brathwaite hopes the pitch for the third Test will be helpful to his four-pronged pace attack, as West Indies chase victory in the final game here this week. 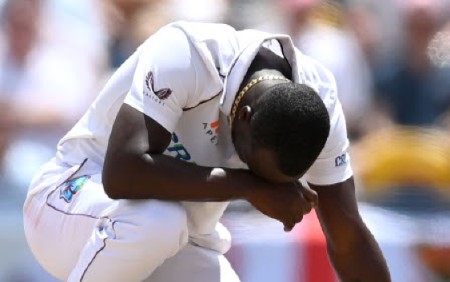 West Indies bowlers have been frustrated by flat pitches in the series.The preceding Tests in Antigua and Barbados were played out on turgid surfaces, both resulting in tame draws with batsmen enjoying the better of the conditions and seamers struggling to make an impact.

“We haven’t been there (Grenada National Stadium) for a while so we have to see what we get there. Obviously the guys are looking forward to the third Test match,” Brathwaite said.

All three Tests staged here have proved to be competitive affairs, with the last two – against Bangladesh and England – ending in results for the visitors.

In the last Test here seven years ago, West Indies managed totals of 299 and 307 – with Brathwaite getting a second innings hundred – but England pulled off a nine-wicket win after posting 444 in their first innings.

Pacers snatched 18 of the 31 wickets to fall in that match, raising hopes that the third Test could see the faster bowlers coming in to their own, but Brathwaite said it was important his side batted properly regardless of the surface.

“I can’t obviously stress about the pitch. The pitch is whatever the groundsman produces. We’re just hoping to be on top so let’s hope in Grenada we’re on top at the end of the game,” he stressed.

“I think back-to-back now we’ve batted over 120 overs, especially [the first innings in the second Test] after England made 500 and then we came and batted 180 overs, I thought that was remarkable and we can only get better from here.

“We’ve obviously just got to keep learning different periods of the game and as a unit we’ll get a lot better.”

He added: “I thought it was a good job. Obviously we have to keep improving as a team. Batting a last day is never easy but we’re heading in the right direction.”

England head coach Paul Collingwood said his side had played outstandingly on difficult pitches and believed they could finally find the elusive win in Grenada.

“To back that performance up in Antigua like we did [last] week in many ways is even more impressive,” Collingwood pointed out.

“Three back-to-back Test matches are pretty grueling and to play on pitches like that is hard work.