NORTH SOUND, Antigua – Head coach Phil Simmons has lamented the inconsistency of his bowlers here Tuesday, after they allowed Sri Lanka a foothold on the third day of the opening Test. 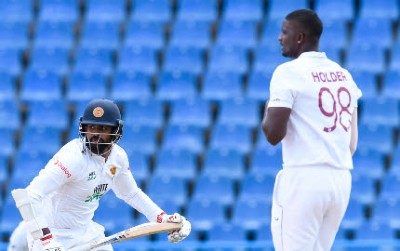 Fast bowler Jason Holder (right) looks on as opener Lahiru Thirimanne gathers runs through the on side during his half-century on Tuesday.West Indies secured a 102-run first innings lead but Sri Lanka finished the day on 255 for four in their second innings – already an advantage of 153 runs heading into Wednesday’s fourth day at the Vivian Richards Cricket Stadium.

Oshada Fernando (91) and opener Lahiru Thirimanne (76) put on a record 162 for the second wicket to underpin their side’s innings but Simmons said West Indies said his bowlers had not been disciplined enough in their approach.

“It was a difficult [day]. The two guys batted well for them but I also think we didn’t show enough discipline and enough consistency in the way we bowled at them,” Simmons complained.

“There were times when they got runs too easily. When you look at the scorecard for the first two days, the rate was 2.3 [runs per over]. Today it was 3.1, 3.2 so from that aspect [we will be disappointed] but they batted well so you have to give them that.”

Seamer Kemar Roach had struck early when he removed captain Dimuth Karunaratne for three in the innings’ fifth over, caught at third slip by John Campbell with only eight runs on the board.

But Fernando then scored freely with 11 fours off 149 balls to notch his second half-century while Thirimanne opted for the anchor role in carving out his eighth Test fifty.

Pointing to Fernando, Simmons said the Windies bowlers had allowed him too many easy runs.

“It’s Test match cricket and we’ve got to make sure that at some points in the day, we’re making them play where we want them to play, we’re bowling enough overs tight so they don’t score too much and that’s where the pressure comes in Test match cricket,” Simmons pointed out.

“He (Fernando) played well; I agree. Especially when we bowled him a little bit wide outside off stump, he scored heavily but at the same time, he was not kept quiet long enough. He was not made to leave enough balls like we did with Thirimanne.”

He added: “As I said, the guys batted well and we didn’t pitch enough balls in the areas consistently throughout the day.”

In the end, it was part-time seamer Kyle Mayers who proved the catalyst for the breakthrough, removing Fernando and veteran Dinesh Chandimal (4) in successive overs, to snaffle his first wickets in Test cricket.

Both dismissals were catches at the wicket off gentle away-swingers which forced the batsmen to play, and Simmons said the way Mayers went about his bowling had underscored his argument.

“He came on and he put the ball in the right area from the first ball, as we see from that first wicket and then with Chandimal’s wicket too,” said Simmons.

“That’s the area we were talking about during the day and he came on and did it well.

“He has that ability. He has the ability to come and bowl a few overs and the skipper used him to get those breakthroughs and then went back to his senior bowlers which was correct.”

West Indies were dismissed in the second over of the morning for 271 in their first innings after resuming on 268 for eight, in reply to Sri Lanka’s 169.