Waterhouse Into Knockout Round of CONCACAF Caribbean Club Championship

SANTIAGO DE LOS CABALLEROS, Dominican Republic – Jamaican side Waterhouse struck in each half to outduel Haiti’s Arcahaie, while the result was reverse when two other clubs from those nations faced each other as action in the 2022 CONCACAF Caribbean Club Championship continued. 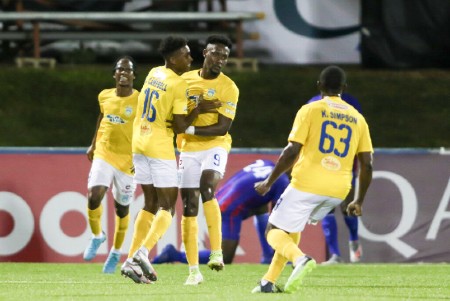 Waterhouse FC celebrate during the match against Arcahaie. (Photo: CONCACAF)A goal in each half lifted Waterhouse to a 2-0 victory over Arcahaie on Sunday in Group B action at the Estadio Cibao FC, qualifying it for the knockout stage. Meantime, Haitian club Violette rallied to defeat Cavalier of Jamaica, 3-2, in Group A action at the same venue.

In the Waterhouse-Arcahaie clash, the Jamaican club had the stronger start and managed to break the deadlock midway through the first 45 minutes, as Andre Moulton met a cross from the left wing from Shaqueil Bradford and fired into net for a 1-0 lead.

Arcahaie sought to get back on level terms and had a good look at it in the 51st  minute through Clifford Thomas, but Waterhouse goalkeeper Kemar Foster was alert and made the save.

Waterhouse were aiming to add another goal to their total and moments after missing wide with a header, Devroy Grey completed a fantastic solo move with a strong finish into the net in the 78th minute to double the lead.

Arcahaie kept fighting, though, and came within a whisker of pulling a goal back in the 81st when a hard hit from Kenley Hazard smacked off the crossbar.

In the end, Waterhouse were able to nail down the three points to book their place in the next round. They will face off Atlético Vega Real for first place in the group on Tuesday.

In the other match, it was a quick start for Cavalier, who in their first-ever CONCACAF match took a 1-0 lead in the 3rd minute when Ronaldo Webster outraced the Violette defense and finished past goalkeeper Steve Sanon.

Violette responded, pulling level 1-1 in the 25th minute, as Elyvens Dejean took advantage of a defensive error from Cavalier and swept in a shot for the equalizer.

Violette would then take their first lead of the match right before halftime thanks to Kerlins Georges, whose right-footed volley (45+6’) handed the Haitians a 2-1 advantage.

But back came Cavalier and it was even again, 2-2, in the 63rd minute with Gagail Irving doing the damage again, lurching forward to spear home a header in between a pair of defenders.

Both sides were pushing to find the winning goal and it would come for Violette, as Dejean scored his second of the day in the 71st minute by slotting home a right-footed shot underneath Cavalier goalkeeper Jeadine White to complete the 3-2 scoreline.

Cavalier will take on Cibao FC on Tuesday, when the group stage wraps up, in their hunt for a result to clinch a spot in the knockout stage. Cibao only need a draw to advance to the next round, while Cavalier will require a victory to leapfrog Violette of Haiti and make it into the semifinals.