GROS ISLET, St Lucia – Unbeaten Barbados Royals won their fifth on the trot to send their clearest signal yet of their Caribbean Premier League title challenge, when they defeated Jamaica Tallawahs by eight wickets here Sunday. 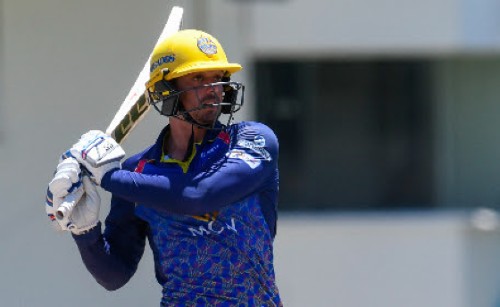 The finish was a little more tense than Royals would have wanted, however, especially after they started the final over from slow medium Rovman Powell needing just four runs for victory.

Powell surrendered only three runs from the first four deliveries before captain David Miller (17 not out) – another South African – sealed victory with a single to long off.

Royals top the standings with ten points from five matches, four clear of Tallawahs who have played the same number of matches.

Earlier, captain Rovman Powell’s second half-century in as many days laid the foundation for Tallawahs’ 156 for eight off their 20 overs.

The right-hander top-scored with 52 from 31 balls, striking five fours and three sixes, his knock helping to pull Tallawahs out of trouble at seven for two in the fourth over after openers Brandon King (0) and Kennar Lewis (1) perished cheaply.

Powell put on 57 for the third wicket with left-hander Amir Jangoo who struck 30 from 36 balls with two fours and a six, before adding a further 34 for the fourth wicket with Raymon Reifer (41).

When Powell fell in the 14th over to be one of three wickets for left-arm seamer Obed McCoy (3-24), Reifer, who struck a four and three sixes off 26 balls, then powered the back end of the innings in a 43-run, fifth wicket stand with Fabian Allen (20).

In reply, Kyle Mayers registered a rare failure (12) but de Kock and Bosch took control of the run chase in a thrilling 117-run, second wicket partnership which took the game away from Tallawahs and put Royals firmly in control.