MIAMI, Florida – United Kingdom-based striker Adrian Clifton came off the bench to score twice and fire Montserrat to a 4-0 victory over US Virgin Islands, and top of Group A in the CONCACAF 2022 World Cup Qualifiers on Wednesday. 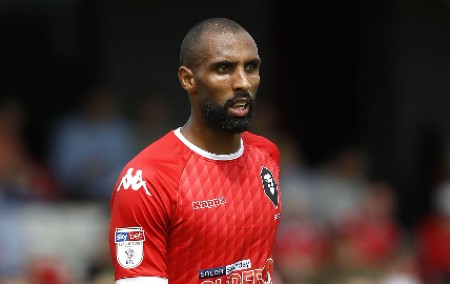 Montserrat’s Nathan Pond.Playing at the Estadio Panamericano in San Cristóbal, Dominican Republic, led 1-0 at half-time but Clifton’s arrival on the hour mark turned the game firmly in his side’s favor as he netted in the 66th minute and 83rd minute.

Desperately needing a win after drawing both their previous games, Montserrat struggled to get the breakthrough before Nathan Pond, who plays for AFC Fylde in England’s National League North club, put them ahead in the 39th minute.

Rohan Ince, who features for English semi-professional side Maidenhead United, doubled the lead on the hour mark before Clifton, who plays for Dagenham and Redbridge in the National League, struck twice to deflate the USVI.

The 32-year-old first netted in the 66th minute before adding his second seven minutes from the end, as Montserrat moved top of their group with five points.

In Group D, Dominica tasted success for the first time as they thrashed Anguilla 3-0 at the Estadio Olímpico Félix Sánchez in Santo Domingo.

All three goals came in the first half with Brien Thomas netting in the third minute, Chad Bertrand adding the second in the 34th minute and Julian Wade completing the dominating three minutes before the break.

Dominica, who had lost both their previous games, now sit third in Group D on three points behind the Dominican Republic and Panama both on six points.

In Group B, Cayman Islands suffered their third defeat in as many games after slumping to a 3-1 loss to Aruba, with Joshua John scoring in either half to seal a convincing victory at IMG Academy in Bradenton, Florida.

There were also massive wins for Cuba who whipped British Virgin Islands 5-0 in Group C in Guatemala City, and Puerto Rico who crushed the Bahamas 7-0 in Group F at home in Mayaguez.