MIAMI, Florida – Jamaica, Trinidad and Tobago, and Haiti have advanced to the final round of the Women’s World Cup qualifiers after victories in the last group games on Tuesday night. 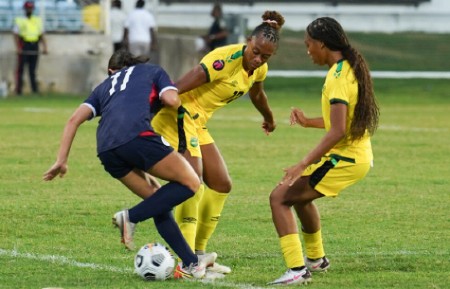 Alyssa Oviedo of the Dominican Republic (left) and Sashana Campbell of Jamaica during their match on Tuesday night. (Photo: CONCACAF)The Caribbean teams secured three of the final six berths as leaders of their groups, joining Mexico, Costa Rica, and Panama in the final team of eight along with Canada and the United States who received byes as the top-ranked teams.

Jamaica ended the first round stage with four straight wins, topping Group C on 12 points while Haiti finished similarly in Group E. Trinidad and Tobago ended the championship at the top of Group F on 10 points after winning three matches and drawing one.

The Reggae Girlz gave home fans at the Sabina Park Stadium in Kingston a reason to smile as they captured Group C with a 5-1 win over the Dominican Republic.

They went into the clash with a slight four-goal advantage on goal difference and had star players Trudi Carter and Khadija Shaw, who were each coming off of hat tricks in their 9-0 triumph over the Cayman Islands last weekend, in the squad. The two again proved their worth.

The only one to touch the scorecard for the Dominican Republic was Kathrynn Gonzalez, who found the back of the net in the 24th minute.

Trinidad and Tobago needed either a win or a draw against Guyana at Dwight Yorke Stadium in Bacolet to lock down first place in Group F. And a late score from Lauryn Hutchinson earned the Soca Warriors a dramatic 2-2 draw.

It had looked like a brace from Guyana’s Sydney Cummings, in the 45th and 82nd minute, would outweigh Asha James’ goal (48th minute), but Hutchinson’s score in the 90th minute delivered the minimum draw the group leaders needed.

Meantime, Haiti continued to flex their scoring muscles and posted a 6-0 win versus Cuba to claim the top position Group E, at the Estadio Olimpico Felix Sanchez in Santo Domingo, Dominican Republic.

Despite leading the group going into Tuesday’s game, with three wins to start qualifying and a +38 goal difference, they still needed to secure a result against Cuba, second on seven points, in order to reach the Women’s World Cup qualifiers.

Roselord Borgella finished as CONCACAF Women’s Championship qualifying’s joint-top scorer with 11 goals thanks to a brace in the 53rd and 74th minute, while Nerilia Mondesir (23rd minute), Melchie Dumornay (64th minute), Batcheba Louis (72nd minute) and a Yarisleidy Mena own goal in the 88th minute, paved the way.

The 2022 CONCACAF Women’s Championship served as the CONCACAF qualifiers to the 2023 FIFA Women’s World Cup which will be hosted jointly by Australia and New Zealand from July 20 to August 20, 2023.