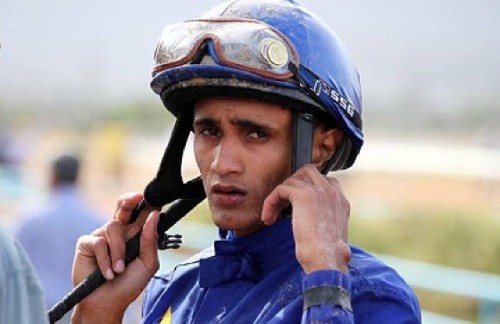 Veteran Stephenson had earlier grabbed his victories in race three with 2-1 bet French Rose and in race four with 3-1 choice Lady Nyla.

The pair are tied on nine wins, one behind third placed Barbadian Renaldo Cumberbatch who won once on the program and two shy of second placed Jamaican Chavion Chow who went winless.

Jorge Carreno tops the standings with 16 wins from 50 rides.

It was Stephenson who was first to the winners’ enclosure, pairing with five-year-old chestnut mare French Rose to thrash the three-year-old and upward fillies and mares by 5-¼ lengths in a six furlong sprint.

French Rose forced the pace set by Melisandre and Cypress Point before getting to the front and drawing off impressively.

Stephenson’s second win was another dominant performance over six furlongs, this time combining with four-year-old brown filly Lady Nyla to get the better of the three-year-old and upward fillies and mares by 4-¾ lengths.

Badrie’s opening win was a narrow score, four-year-old bay gelding Goldeneyed barely holding to beat the three-year-olds and upward by a head, after grabbing the lead early in the stretch of the six furlong contest.

And he completed his double in another six furlong trip, guiding five-year-old chestnut mare Tuscan Damsel to victory by a length over the three-year-old and upward fillies and mares, after coming from of the pace to reel in the leaders.