PORT OF SPAIN, Trinidad –President of the Trinidad and Tobago Olympics Committee (TTOC), Brian Lewis, Tuesday said he remains ”shocked and saddened” at the death of 29-year-old Olympian, Deon Lendore, in a car accident in Texas on Monday night. 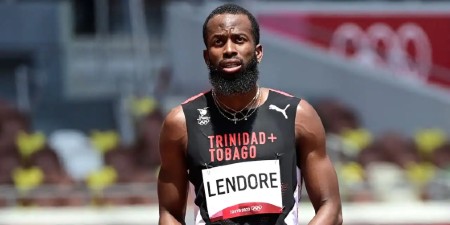 3-time Olympian Deon Lendore (File Photo)“I would have received the news at around 11.53 pm and I haven’t been the same. I really feel for his family, the community of Arima…this is a young man at age 29, his best is still to come. He had great aspirations, he had just rebounded from a very difficult period.

“He was so excited about the Commonwealth Games, the World Track and Field Championships and Paris 2024. It is tough. He is 29. It is really tough trying to describe him in the past tense…it is a very sad day,” Lewis said on the 1.955FM radio station.

Details of the accident remain sketchy, but his teammates have flooded social media with tributes celebrating the life and achievements of the national quarter-miler, who competed at three Olympic Games in London 2012, Rio de Janeiro 2016 and at the Tokyo Games last year.

On debut in London, Lendore and compatriots Jarrin Solomon, Ade Alleyne-Forte and Lalonde Gordon powered to bronze in two minutes, 59.40 seconds (2:59.40). He also earned three bronze medals at the World Indoor Championships. In Portland, USA in 2016, he placed third in the men’s 400m and 4x400m events.

Two years later, he repeated the feat in the 400m event at the Birmingham, United Kingdom leg. Also in 2018, he just missed out on a medal at the Commonwealth Games in Gold Coast, Australia, after placing fourth.

“He was an inspiration to so many. If it is one time, gone too soon…it is a very sad day. I express sincerest and deepest condolences to his family in particular who must be inconsolable”.