PORT OF SPAIN, Trinidad and Tobago – Trinidad and Tobago are now in a good position to contest the top of their group after a 4-1 victory over St. Vincent and the Grenadines in Group C of League B of the CONCACAF Nations League (CNL) on Monday night. 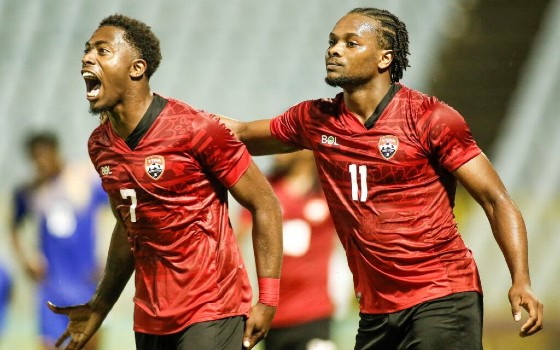 Noah Powder and Levi Garcia celebrate Trinidad and Tobago’s 4-1 victory over St. Vincent and the Grenadines in League B, Group C action on Monday night. (Photo: CONCACAF)The loss for St. Vincent, meantime, leaves them at the bottom of the group on just one point but still with hopes of avoiding relegation.

Trinidad and Tobago collected their third consecutive victory at the Hasely Crawford Stadium.

The home side took the opening goal within the encounter’s first 10 minutes. Judah Garcia capitalized on a contested ball falling his way and drove into the box to slot it past goalkeeper Lemus Christopher in the ninth minute.

Noah Powder doubled the lead for the Soca Warriors just two minutes later. A service into the box by Duane Muckette found its way to Powder, with Christopher just missing the interception.

Cornelius Stewart cut the deficit to 2-1 for the visitors in the 26th minute. The goal came from a combination in which Azinho Solomon drove forward to set up the overlapping Jazzi Barnum-Bobb, the right back then curved it towards the penalty area and Stewart converted with a slick right-footed hit.

Powder secured a brace to restore a two-goal lead for the Soca Warriors in the 41st minute when Levi Garcia took on defenders in the box, giving himself a bit of space and the chance to set up the pass for Powder to arrive and convert.

The visitors would not go quietly into the night and began to generate some of the better opportunities of the second half. Stewart was continually active to try and break through the defense and get his second of the night. 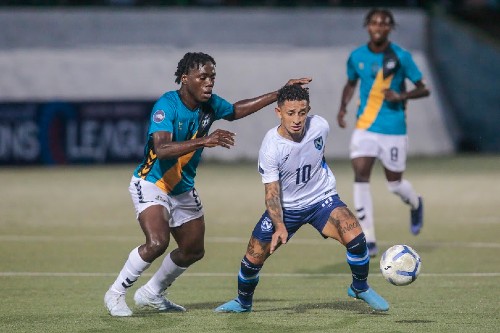 Byron Bonilla of Nicaragua drives the ball during the match against The Bahamas. (Photo: CONCACAF)

The home side finally broke through though with their fourth goal of the night in stoppage time. John Paul Rochford struck toward goal in the 90+1 minute to secure the three points.

Trinidad and Tobago are now on nine points in the group, one behind leaders Nicaragua who demolished The Bahamas 4-0 at the National Football Stadium in Managua on Monday as well.

Juan Barrera opened the scoring for the home side in the 19th minute when the 33-year-old forward converted from the penalty spot to give Nicaragua the lead.

Jaime then Moreno extended the lead for Nicaragua in the 34th minute with a goal from open play that brought the goal scorer level with teammate Byron Bonilla for two in this CNL edition.

Moreno took the position of top scorer in the tournament for his country with a conversion inside the box in the 45th minute of play. The play generated on the wing with Barrera feeding Brayan Lopez, who then drove into the box to serve Moreno’s brace.

Nicaragua were awarded another penalty when Kenaz Swain tried to deny Quijano almost 30 minutes into the second half. Ariagner Smith took the shot from the twelve steps and slotted it into the bottom left corner in the 74th minute.

Barrera nearly got the fifth for Nicaragua on service into the box but headed it wide in the 84th minute. A few minutes later, the historic goal scorer thought he had a brace but was just a few steps offside.

The three points place Nicaragua back at the top of the group and in pole position for promotion with a 3-1-0 record. The Bahamas are third in the group with a 1-0-3 record.