NORTH SOUND, Antigua – A sensational hundred from Roshon Primus upstaged Nicholas Pooran’s and rattled Trinidad and Tobago Red Force, but the reigning champions held their nerve to beat Barbados Pride by 10 runs and surge into Saturday’s final of the Super50 Cup. 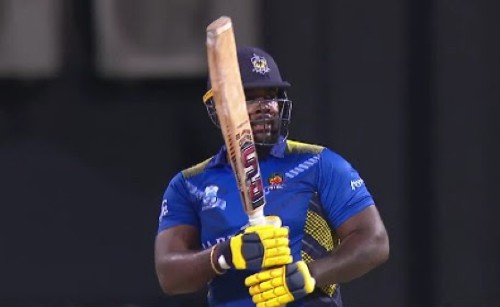 Roshon Primus goes on the attack during his unbeaten 130 in Wednesday’s semi-final.Chasing a daunting 313 after captain Pooran lashed his maiden regional one-day hundred of 112 in the first day/night semi-final here Wednesday, Pride appeared to be out of the contest when they slumped to 146 for six in the 30th over, speedster Shannon Gabriel ripping through the innings to finish with four for 43.

However, entered Primus at number seven to unveil a quite astonishing unbeaten 130 from 79 balls which helped Pride claw their way back into the run chase and place Red Force under enormous pressure.

At the start of the final over, Pride needed 17 runs with Primus on strike and while the heavyset right-hander pulled the first delivery from Gabriel to the mid-wicket boundary, he could only muster two runs from the next five deliveries.

“[I’m] pretty gutted right now that I couldn’t bring the guys over the line. In Bajan terms, I brought the guys to the sea and I let them drown,” said a dejected Primus.

The 27-year-old blasted 10 fours and nine giant sixes – hefty blows on both sides of the ground – to post his maiden List A hundred in his 25th match.

Crucially, he put on an absolutely invaluable 93 for the seventh wicket with Akeem Jordan, who struck 33 from 43 balls, before adding a further 63 in an unbroken ninth wicket stand with Camarie Boyce (13 not out).

“After watching Pooran’s innings, all I was thinking was I could do the same so I just went out with my mind clear and said I was going to play a special innings for my team,” Primus continued.

“In the latter part of the innings, all I was saying was I need a 20-run over and then it should be smooth sailing from there.”

Veteran left-hander Jonathan Carter chipped in with 45 from 74 balls while Nicholas Kirton struck a breezy 35 from 31 balls and captain Shai Hope, 24, but none of them carried on, leaving Primus to salvage the innings.

“Primus stole the show tonight. Credit goes to him – that was a fabulous innings,” Pooran said.

Pooran had earlier produced special fireworks of his own, striking five fours and eight sixes in an 82-ball knock which pulled Red Force out of trouble and carried them to a tournament-high 312 for six off their 50 overs.

Left-handers Amir Jangoo with 81 from 114 balls and Darren Bravo, with 54 from 65 balls, weighed in with half-centuries before Akeal Hosein arrived late on to belt a 20-ball 42 which included three fours and three sixes, as he posted a whirlwind 53 off 26 balls for the sixth wicket with Terrance Hinds (nine not out).

Sent in, Red Force were reeling at two for two in the third over when seamer Jordan (2-31) removed Kjorn Ottley (1) to a catch at the wicket and then hit Jason Mohammed in front with the very next ball.

Pooran raised triple figures off 77 balls with a tickle to fine leg for four in the 45th over before joining Jangoo in holding out in the deep off seamer Shamar Springer (4-64).

In reply, Pride too were in early trouble at 13 for two in the fourth over, Gabriel getting Zachary McCaskie (1) to nick to first slip before shattering Kyle Hope’s stumps for four.

Carter then put on 32 for the third with Shai and 63 for the fourth with Kirton but he was one of three wickets to fall for 38 runs – slapping Gabriel to deep point – leaving Pride with an uphill battle.

Primus’s arrival reignited the run chase, his first fifty coming from 36 balls and his second needing only 25, reaching his hundred with a four to third man off Hinds in the 47th before taking Pride close.