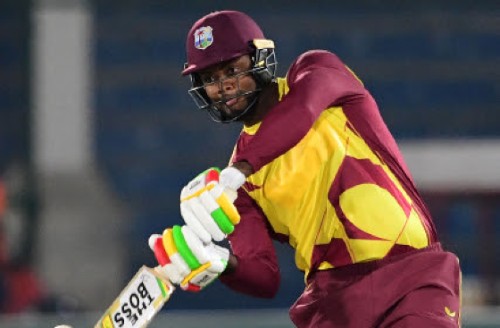 Man-of-the-Match Romario Shepherd.Chasing 270 for victory at the Brian Lara Stadium, Red Force failed to get the 11 runs required from the final over sent down by seamer Clinton Pestano, to taste defeat for the first time in Zone A.

The left-handed Bravo top-scored with 71 at number four, opener Kjorn Ottley got 49 while Yannic Cariah chipped in with 30 down the order, but it was Sunil Narine’s 17-ball unbeaten 30 which nearly got Red Force over the line.

Narine, who notched four fours and a six, stole a single off the first delivery of the final over before scampering two byes off the second with Akeal Hosein, who then pinched a leg bye off the third.

Sent in, Harpy Eagles posted 269 for nine from their 50 overs but needed a superb unbeaten 74 from all-rounder Romario Shepherd at number eight to get up to their total.

Sherfane Rutherford slammed 49 from 64 balls, opener Anthony Bramble punched 42 from 37 balls and Tevin Imlach, 32 from 67 deliveries, but Harpy Eagles were undermined by veteran fast bowler Shannon Gabriel (4-42) and off-spinner Narine (3-17) and slumped to 210 for nine at the end of the 44th.

However, Man-of-the-Match Shepherd blasted five fours and half-dozen sixes in a 46-ball cameo, adding 68 from 36 deliveries for the final wicket with Veerasammy Permaul (4).

Bramble, who struck five fours and a six, put on 69 for the first wicket with Tagenarine Chanderpaul (25) before Narine and Gabriel combined to send four wickets tumbling for 17 runs off 37 deliveries.

At 86 for four in the 16th over, Harpy Eagles found solace in an 83-run fifth wicket stand between Rutherford and Imlach before another slide saw five wickets slide for 32 runs.

In reply, Red Force also had a solid start, Ottley hitting seven fours in a 79-run opening stand with Joshua Da Silva (28) before both perished in successive overs with no runs added.

Bravo arrived to hold the run chase together, putting on 47 for the third wicket with Jason Mohammed (24), 44 for the fourth with captain Nicholas Pooran (23), 56 for the fifth with Cariah and 24 for the sixth with Narine.

The turning point came when Bravo holed out to long on off Pestano at the end of the 48th over.