GROS ISLET, St Lucia – Trinbago Knight Riders slumped to their second defeat in three outings after their batting suffered yet another meltdown in pursuit of a gettable target against Jamaica Tallawahs here Saturday. 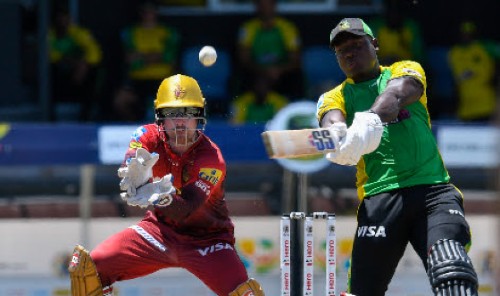 Rovman Powell hits out during his half-century against TKR on Saturday. (Photo courtesy Getty/CPL)Asked to chase only 154 at the Daren Sammy Cricket Ground, TKR limped to 119 for eight from their 20 overs to go down by 34 runs, with only New Zealander Colin Munro passing 20 with a top score of 29 from 30 balls.

The defeat left the multiple-time champions fourth in the table on three points, above last year’s losing finalists on two points and Guyana Amazon Warriors on a single point.

West Indies star Rovman Powell’s 67 from 49 deliveries had earlier lifted Tallawahs to 153 for seven from their 20 overs after they were sent in.

The right-hander lashed half-dozen fours and four sixes, putting on a precious 95 for the fourth wicket with all-rounder Raymon Reifer (28), after Tallawahs found themselves in a hole at 31 for three at the start of the seventh over.

Reifer played the supporting role, counting four fours in a 26-ball knock before falling in the 17th over and Powell followed at the start of the next over, after completing a 42-ball fifty.

TKR then lost left-hander Narine without scoring to the third ball of the innings, bowled by pacer Mohammad Amir (2-15) with one run on the board.

Munro tried to repair the innings in a 25-run second wicket stand with Tion Webster (5) before holing out in the deep in the 10th over after hitting a four and two sixes, and his countryman Tim Seifert (15) put on 21 for the fourth with left-handed Nicholas Pooran (13) before following at the end of the 12th over.

There was a clatter of wickets thereafter as left-arm spinner Imad Wasim (2-20) struck telling blows at the back end.