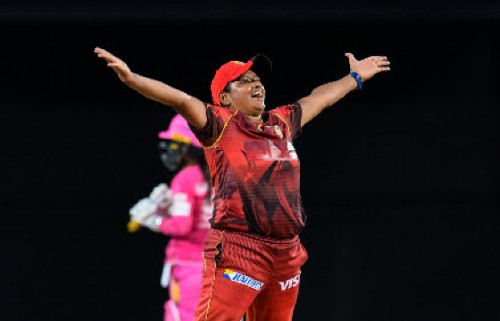 Veteran West Indies off-spinner Anisa Mohammed celebrates another wicket in Sunday’s final. (Photo courtesy Getty/CPL)Captain Deandra Dottin’s 59 from 62 balls was the foundation of TKR’s 100 for seven from their 20 overs, her opposite number Hayley Matthews snatching three for 22 with her off-spin to keep Royals in the contest at the half-way stage.

In reply, Royals were carried by Matthews who top-scored with 46 from 49 deliveries but no other player reached double figures as the innings folded for 90 with eight balls remaining.

“It (win) feels very good. This was our aim to go out there and get this championship and we worked together as a team and we are well deserving of it,” said TKR wicketkeeper Natasha McLean, who snared three dismissals.

Added Luus: “It’s amazing. I think it’s going to be a lot of celebrations tonight.”

Sent in, TKR lost Lee-Ann Kirby for three in the fourth over but Dottin anchored the innings, striking four fours and two sixes.

She put on 29 for the second wicket with Luus (12) and when three wickets tumbled for just 15 runs, added a further 32 for the fifth wicket with Kyshona Knight (8).

Dottin was seventh out in the penultimate over, top-edging a heave at Matthews to short third man.

Royals wobbled early in their run chase, slipping to 16 for two in the fourth over before Matthews and South African Chloe Tryon (7) put on 20 for the third to stem the flow of wickets.

However, that proved to be the best stand of the innings as once Tryon was stumped off Mohammed, wickets continued to tumble.

Matthews tried to salvage the run chase, counting three fours in a cautious knock before she was ninth out in the penultimate over with 11 runs required from as many balls, pulling Mohammed into the lap of deep mid-wicket.