RABAT, Morocco – Olympic champion Elaine Thompson-Herah will headline next weekend’s Rabat Diamond League when she lines up in the women’s 100 meters. 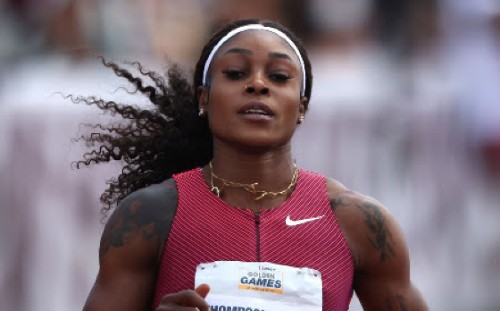 Jamaican Elaine Thompson-Herah.The 29-year-old will feature in a field which also includes fellow Jamaican Natasha Morrison and the Bahamian duo of Anthonique Strachan and Tynia Gaither.

Trinidadian Michelle-Lee Ahye, the 2018 Commonwealth Games champion, will also line up in the contest on Sunday.

Only last weekend, Thompson-Herah warmed up nicely for the season when she captured the 100 meters in Eugene, clocking a season 10.79 seconds.

She led home flamboyant American Sha’Carri Richardson who was timed at 10.92 along with third placed Jamaica Shericka Jackson.

“I’m happy to cross the line healthy and with the win. It got me ready for my championship in Jamaica next month. I’m happy to see where I’m at. The result is good,” Thompson-Herah said following her win.

Jamaican Shelly-Ann Fraser-Pryce snatched victory in the 200m in 22.41 while Grenadian Kirani James, a bronze medalist in Tokyo last year, ran second in the 400m in Eugene to American Michael Norman in a season-best 44.02.

The veteran Fraser-Pryce, who is not down to compete in Rabat, said she was also building up to her country’s national championships.

“I wanted to execute technically. I still have some time to go before I get my national trial so you always want to use every opportunity to practice your race plan,” the 35-year-old said.