Thompson-Herah Set to Part Company With Coach and Track Club 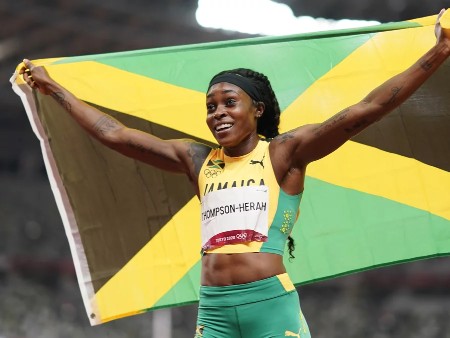 Elaine Thompson-Herah, of Jamaica, reacts after winning the final of the women's 200-meters at the 2020 Summer Olympics, Tuesday, Aug. 3, 2021, in Tokyo. David Goldman/APAccording to media reports, Thompson-Herah, 29, wrote to Francis, the club and Nike, her shoe sponsor, informing them of her decision.

Francis coached Thompson-Herah for all her history-making career in which she won double sprint gold medals in the 100 and 200 meters at the 2016 Olympics in Rio de Janeiro and this year’s rescheduled Tokyo Olympics.

Thompson-Herah will be the second high-profile female sprinter to leave the MVP barn after another Jamaican sprint queen, Shelley-Ann Fraser-Pryce left for Elite Performance more than a year ago.

Francis said training for elite MVP athletes resumes next month and he would not be surprised if Thompson-Herah failed to show up.

“I don’t know if she is going to be here, but neither do I for anybody else in her situation,” Francis told the Jamaica Gleaner newspaper.

“What I can tell you is that I am not in the habit of revealing communication which occurs between me and my athletes, so I can’t comment on that.

“But I would suggest to you that if you have heard that and you believe it and you want to find out, then the best person is her because from my perspective we start back practice sometime in October, just after Heroes weekend and my philosophy is usually to see who turns up.”

No indication was given about which athletic club Thompson-Herah will partner with, but the Gleaner indicated that her husband, Derron was expected to take over her training regime.

Francis said he would take a wait-and-see approach to see if Thompson-Herah will attend training, but felt the athlete was being advised badly.

“What my experience tells me is that athletes in general, especially those who come from a low expectancy level, in other words, not much was expected of them, they are usually unable to separate themselves from the people who hop onto their various bandwagons,” he said.

“They tend to have short memories and they tend to listen to people they just meet or who have been around them since they became successful or famous and they usually, from my experience, have a very great influence.

“It takes a smart and strong athlete to sit back and say, ‘you guys weren’t around, so leave me let me make my decision’.”

Francis said he had no issues with Thompson-Herah different to what he had encountered with other athletes.

“I don’t think the relationship has been any different, any better or any worst than usual,” he told the Gleaner. “One of the problems that usually happens in MVP, our approach to training, to coaching, to the development of athletes, is far different to what persons are accustomed to.

Francis told the Gleaner: “Being successful, you tend to want to see those types of things happen to you and again the athletes lose focus on what their accomplishments are and focus on things that I would call at best frills.

“So we do have problems with those people who do not like to be around competition in their camp.”

In Tokyo, Thompson-Herah became the first woman to defend the 100 and 200 titles at the same Olympics, and she also won gold in the 4×100 relay.

After the Olympics, Thompson-Herah became the first woman to run four legal times under 10.70 in the 100, including a personal best of 10.54, a time bettered only by five hundredths-of-a-second by deceased American track star, Florence Griffith-Joyner.