LONDON, UK – Teenager Daniel Jebbison wrote his name into the record books on Sunday when he scored on his first English Premier League start to hand already relegated Sheffield United a shock 1-0 victory at Goodison Park that dented hosts Everton’s hopes of qualifying for Europe next season. 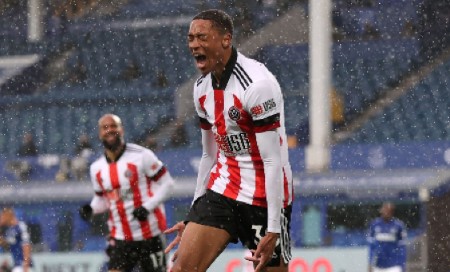 Daniel Jebbison celebrates his goal against Everton.The six-foot, three-inch tall 17-year-old Canada-born forward, who is of Jamaican and English descent, claimed the winning goal after seven minutes, sliding in from close range after good work by Jack Robinson in the penalty area.

Jebbison had the chance to double his tally when he seized on a short back pass by Mason Holgate, but his effort was saved by goalkeeper Jordan Pickford.

Jebbison, who came on as a substitute for Sheffield United against Crystal Palace last week, made his debut for England Under-18s in a 2-0 friendly win over Wales in March, his previous competitive start having been last December at sixth-tier National League North side Chorley, where he was on loan.

At 17 years and 309 days, Jebbison on Sunday became the youngest player to score on his first Premier League start, overtaking Danny Cadamarteri’s record, set for Everton against Barnsley in September 1997 – 17 years and 343 days –which was also scored at Goodison Park.

Jebbison, who was born in Oakville, Ontario but moved to England in 2017,  was also the youngest player to score a match-winning goal in a Premier League game since Federico Macheda for Manchester United against Sunderland in April 2009 when he was 17 years and 232 days old.

Sheffield’s interim manager Paul Heckingbottom said: “It was a fantastic moment [for Jebbison]. It couldn’t have worked out any better.

“He’s a hard-working lad who has developed quickly in the academy. Everyone will be talking about him now and that will bring different expectations but we will manage him properly.”

He added: “He’s nowhere near finished. He deserves his chance. He’s been put in on merit.

“The biggest reason he was in the team was his running power to stretch their team and be in between the posts when we put the ball in the box. The coaches have helped him develop in a short space of time.

“You can see the hard work and natural athleticism. He listens and learns. He performed his role excellently without the ball. He’s scored the goal. He’s certainly played his part with and without the ball.”

Jamaica’s Football Federation has embarked on a campaign to tie down England-born players who are eligible to represent Reggae Boyz through their parentage, in preparation for their 2022 FIFA World Cup qualifying campaign.

West Ham forward Michail Antonio, whose parents were born in Jamaica, is said to be keen on linking up with the Caribbean powerhouses, with the country also targeting the likes of Bayer Leverkusen winger Demarai Gray and Norwich City full back Max Aarons.

Six England-born players were called up for their Reggae Boyz debut earlier this year.