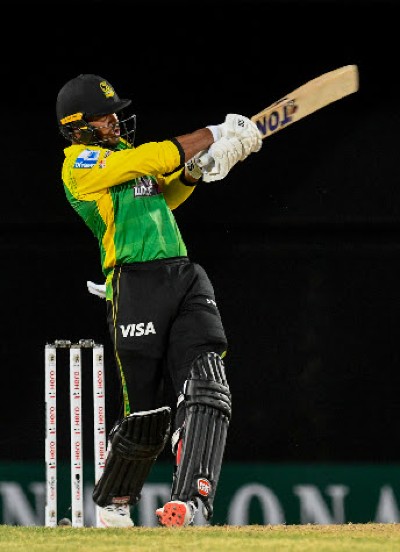 Brandon King pulls during his half-century for Jamaica Tallawahs. (Photo courtesy CPL Media)Playing in the opening game of the Men’s Caribbean Premier League at Warner Park here Wednesday night, Tallawahs gathered a challenging 183 for two off their 20 overs with opener King lashing 89 from 57 deliveries.

Gordon then snatched three for 32 to break the backbone of Patriots’ batting as the hosts limped to 136 for eight in reply.

Coming off a disappointing last season where they missed out on the playoffs, Tallawahs started strongly courtesy of King, the West Indies right-hander hitting eight fours and half-dozen sixes to energize the innings after being asked to bat.

He put on 116 for the first wicket with fellow Jamaican Kennar Lewis – who lived a charmed life in scoring 48 from 46 balls with half-dozen sixes – before adding a further 51 for the second wicket with Rovman Powell who slammed a four and three sixes in a 15-ball unbeaten 30.

King reached his half-century off 36 balls at the end of the 12th over before perishing to the first delivery of the final over, holing out to long on off captain and medium pacer Dwayne Bravo.

The Patriots run chase started badly, Evin Lewis departing for four with nine on the board in the third over before opener Andre Fletcher, who made 31 from 34 balls, steadied the innings in a 37-run second wicket partnership with Dewald Brevis (14).

However, Patriots then lost wickets in two clusters to see their chase derailed. Firstly, three wickets tumbled for 15 runs in 20 balls to leave the innings perched on 61 for four in the 11th over.

Sherfane Rutherford, who smashed four sixes in top-scoring with 33 from 22 balls, tried to rescue the innings in a 41-run, fifth wicket stand with Bravo (13) but Gordon triggered a second collapse which saw four wickets fall for 11 runs in the space of 13 deliveries.