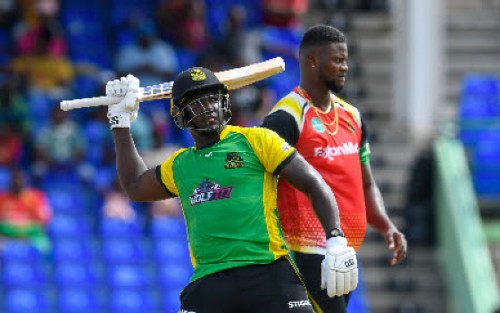 Rovman Powell celebrates Tallawahs win over Amazon Warriors on Saturday. (Photo courtesy Getty/CPL)Chasing 143 at Warner Park, Tallawahs got home with four balls to spare, to seal their second win of the campaign, after beating St Kitts and Nevis Patriots by 47 runs in their opener.

Rovman Powell led the run chase, top-scoring with an unbeaten 44 from 38 balls while opener Brandon King followed up his half-century in the first game with 32 from 25 deliveries.

Tallawahs were forced to overcome an outstanding spell from left-arm spinner Gudakesh Motie who snatched two for ten from his four overs.

Earlier, seamer Pakistan pacer Mohammad Amir claimed three for 22 and South African fast bowler Migael Pretorius, two for 35, as Amazon Warriors were restricted to 142 for six from their 20 overs.

Shimron Hetmyer struck 39 but the knock was a slow one requiring 45 balls while all-rounder Romario Shepherd blasted a rapid 17-ball 36.

Amir gave Tallawahs a superb start when he knocked over openers Paul Stirling (1) and Chandrapaul Hemraj (2) to leave the innings at five for two in the third over.

Hetmyer, who hit two fours and a six, repaired the innings in a 66-run, third wicket stand with Shai Hope (25) and when both fell in the space of two balls in separate overs with the score on 71, Shepherd arrived to rescue his side.

He belted three fours and as many sixes, posting 51 for the fifth wicket with South African Heinrich Klaasen who struck 22 from 15 deliveries.

In reply, Tallawahs found themselves in a spot of bother at 41 for three in the seventh over despite King’s enterprise which was highlighted by four fours and a six.

But Powell batted with maturity, punching one four and four sixes as he put on 29 for the fourth with Amir Jangoo (15), 23 with Imad Wasim (18) for the fifth wicket before anchoring an unbroken seventh wicket stand of 39 with captain Chris Green (17 not out) which put Tallawahs over the line.