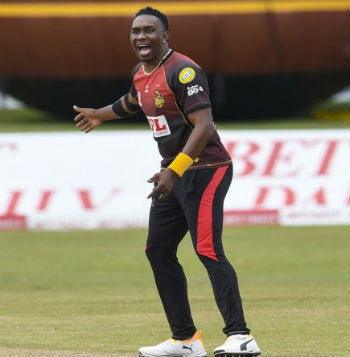 “Bravo” With the fourth ball of his opening over, the 36-year-old Bravo had Cornwall caught at cover by New Zealander Colin Munro for 18 in the fourth over of the St. Lucia Zouks innings, to reach the coveted landmark. That scalp also made him the first bowler to reach 100 wickets in CPL.

Bravo said reaching the milestone at his domestic club venue, where he has played since his childhood, made the occasion even more special.

“It’s been a great journey,” he said.“I want to say thanks to all my teammates and thanks to all the teams I’ve played for around the world.“To be able to achieve (this) right here at home, this is where I started playing cricket at age eight and I can’t be a more happier person to get that 500th here at the Queen’s Park Oval.”

Bravo started the tournament on 497 wickets and picked up one each in his first two games, before going wicket-less in Trinbago Knight Riders’ last outing against Barbados Tridents at the Brian Lara Stadium in Tarouba.However, the former West Indies one-day captain said he felt under no pressure to achieve the landmark, although he could not hide the joy he finally did.

“I think everyone is happy for me and I’m happy for myself, and my teammates need to take some credit as well,” Bravo said.

He is a member of the well-travelled galaxy of Caribbean T20 stars, having featured in nearly every global franchise tournament, including the high profile Indian Premier League and the Australian Big Bash. Through the match against the Zouks, he had played 458 T20s and averages just over 24.5 runs per wicket with an economy rate of eight runs per over.