TAROUBA, Trinidad – Captain Nicholas Pooran fell agonizingly short of a maiden regional one-day hundred but Trinidad and Tobago Red Force cruised into the semi-finals of the Super50 Cup with an uncomplicated victory over Windward Islands Volcanoes. 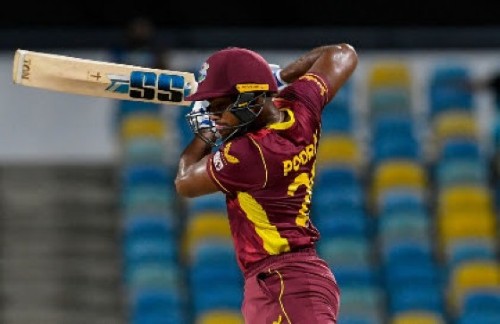 Red Force captain Nicholas Pooran. (file photo)With the reigning champions in pursuit of a revised 249 at Brian Lara Stadium after a near three-hour rain break ended the Volcanoes innings after 40 overs at 201 for four, Pooran found himself stranded on 99 as his side won by seven wickets under Duckworth-Lewis-Stern with an over to spare late Saturday.

Pooran started the 39th over on 97 and punched a single to deep cover off the first ball from Shadrack Descarte. His partner Darren Bravo, who finished unbeaten on 67, patted down the next two deliveries before pulling the fourth delivery to the square leg boundary, much to his own frustration.

A sharp single of the fifth delivery left Red Force with a single run for victory but also left Pooran needing a boundary to reach his hundred.

However, he could only sky the final ball of the over behind the wicketkeeper for a single, ending his quest for the cherished landmark.

All told, the West Indies white-captain smote 11 fours and two sixes off 71 balls while fellow left-hander Bravo gathered nine fours in a 63-ball innings, the pair putting on 165 in an unbroken fourth wicket stand.

Sunil Ambris had earlier suffered frustration of his own when the weather intervened with him in sight of triple figures on 90 not out.

The right-hander struck eight fours and a couple of sixes off 100 balls, pulling Volcanoes out of trouble at 36 for four in the seventh over, in a 165-run, unbroken fifth wicket partnership with Andre Fletcher whose unbeaten 68 came from 103 deliveries and three fours and a six.

Asked to bat in the day/night affair, Volcanoes had the worst possible start. Johann Jeremiah (5) missed an ungainly swipe and lost his off-stump to speedster Shannon Gabriel in the second over and Johnson Charles (8) was run out at the non-striker’s end in the third over after Alick Athanaze turned his back on a single.

Left-arm spinner Akeal Hosein (2-37) then struck twice in the seventh over, first having Alick Athanaze (13) brilliantly caught one-handed at leg slip by Pooran and then getting Kavem Hodge (2) to edge to Sunil Narine at first slip.

Ambris and Fletcher then dominated but once rain changed the trajectory of the contest, Red Force took control.

Kjorn Ottley’s healthy run of form continued when he struck 43 from 53 deliveries with five fours and a six, in a 49-run second wicket stand with Jason Mohammed (25), which helped Red Force around from 22 for one when they lost Amir Jangoo for two in the fifth over.

Both perished in the space of 13 balls with 13 runs added but Pooran and Bravo averted the danger with their entertaining century stand.