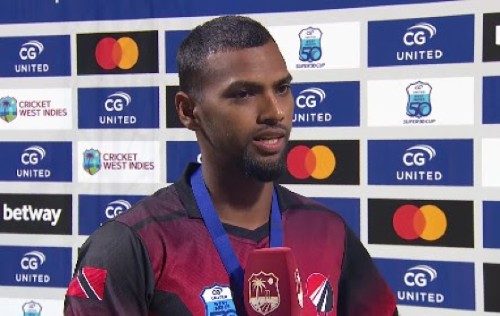 Trinidad and Tobago Red Force captain Nicholas Pooran speaking following Saturday’s Super50 Cup final.Bidding to repeat as champions, Red Force mustered only 217 from 47 overs after being asked to bat first and Pooran said his side had failed to assess conditions at the Vivian Richards Cricket Ground, especially coming off their 312 in last Wednesday’s semi-final against Barbados Pride.

“Today wasn’t our day with the bat and in the end there, we saw we were 50 runs short. We didn’t assess properly,” Pooran lamented.

“The batsmen fought but we kept losing wickets at crucial times and every time we got a partnership we lost wickets.

“We saw Yannic Cariah there in the end, he and Akeal (Hosein) putting on a partnership but we kept finding ways to get out which obviously hurt us in the end.”

Red Force were floundering at 79 for four in the 22nd over when experienced left-hander Darren Bravo (14) tapped a return catch to let-arm spinner Dennis Bulli.

And when Pooran edged a slash at pacer Odean Smith and was taken behind for eight, the innings tottered further at 101 for five in the 27th over.

Left-handers Cariah (43) and Hosein (37) put on 56 for the sixth but once the stand was ended when Cariah trod on his stumps, Red Force lost their last five wickets for 60 runs.

Red Force struck early in the Scorpions innings but then watched as Chadwick Walton lashed 80 from 94 balls and Andre McCarthy, 55 from 89 deliveries, the pair posting 126 for the second wicket to put Scorpions in command.

And even though seamer Terrance Hinds (2-31) and left-arm spinner Khary Pierre (2-42) scythed through the middle order to haul Red Force back into the contest, the small target worked against them.

“The guys obviously fought. Two hundred and eighteen is obviously difficult on that track to defend and I think the guys fought extremely hard – all the bowlers,” Pooran said.

“I’m really proud of the guys. They stuck in there but again, we batted poorly and obviously we paid the price.

“There’s not much we could’ve done differently [with the ball]. If a couple decisions had gone our way early, maybe.

“We tried to get early wickets but it just didn’t happen for us. We got Brandon (King) early but I thought Walton and McCarthy played well. They didn’t give us a chance early and we lost the game there.”

He added: “I thought we brought our A-game in the semi-final … but in the final, we definitely didn’t show up. We didn’t show up with the bat. It’s unfortunate and again we paid the price.

“In saying that, the guys played well throughout the tournament. We deserve to be in the final but someone has to win and someone has to lose in a final and unfortunately we’re the ones that lost.”