PARAMARIBO, Suriname – Suriname’s Inter Moengotapoe has been disqualified and removed from this year’s CONCACAF League, while the club’s owner and Suriname’s Vice President, Ronnie Brunswijk, has been banned for three years from participating in any capacity in CONCACAF competitions. 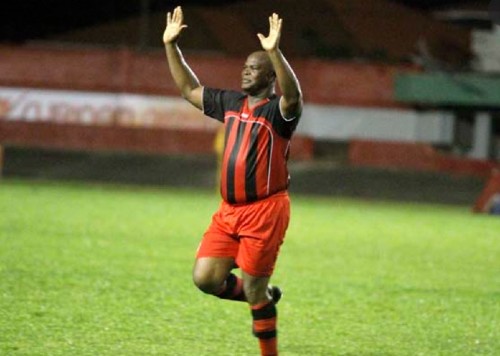 Ronnie Brunswijk played in the match against Olimpia, becoming the oldest player, at 60, to play in an international club competition.CONCACAF made the announcement following a probe into the circumstances surrounding a video that showed Brunswijk allegedly passing out money to Olimpia players and staff in the changing room, after his team’s 6-0 home loss to the Honduran side in a CONCACAF League match on September 21.

Olimpia has also been suspended from the CONCACAF League.

In a statement issued on Saturday, the regional governing body for football said its Disciplinary Committee had “fully investigated the circumstances surrounding the integrity concerns” raised by the video which had been circulating on social media.

“Having assessed the actions evidenced in the video and considered written statements provided by both clubs, the Committee has determined that serious breaches of integrity rules occurred after the match,” it stated.

“As a consequence of these rule breaches, both clubs have been disqualified and removed from this year’s CONCACAF League with immediate effect. Additionally, the Committee has ruled that Mr. Ronnie Brunswijk is banned for three years from participating in any capacity in CONCACAF competitions.”

Brunswijk, 60, had played in the match against Olimpia at Franklin Essed Stadium, becoming the oldest player to play in an international club competition.

He was on the field for 54 minutes and started in attack alongside his son Damian Brunswijk, who played for 29 minutes before being replaced.