Stress Fracture Puts Jofra Archer Out For the Season

LONDON – Barbados-born England fast bowler Jofra Archer has been hit with injury again, ruling him out of the entire season and dealing yet another blow to his topsy turvy career. 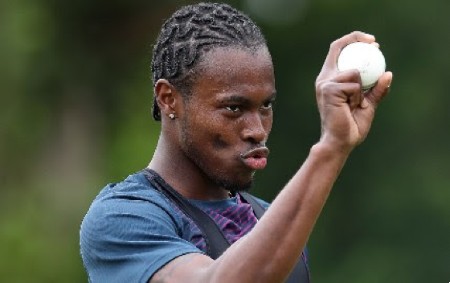 Jofra Archer.The 27-year-old, who spent several months in the Caribbean island recently recovering from elbow surgery, has now been diagnosed with a stress fracture of the lower back.

Archer, who has not played for England in 14 months, was on the verge of making a competitive comeback as early as next week in Surrey’s clash with Glamorganin the T20 Blast.

“After being diagnosed with a stress fracture to the lower back, England and Sussex seamer Jofra Archer has been ruled out for the rest of the season,” the England Cricket Board said in a statement.

“No timeframe has been set for his return. A management plan will be determined following further specialist opinion over the coming days.”

The latest blow means Archer will miss the domestic assignments in the T20 Blast and the Hundred, along with the Twenty20 World Cup in Australia.

Archer made his England debut to much fanfare three years ago before going on to become one of the side’s heroes – bowling a nerve-jangling Super Over – as they won the 2019 World Cup in a thrilling final at Lord’s.

He went on to star in the Ashes later that year in his debut Test series, snatching 22 wickets, bowling with searing pace and famously hitting batting star Steve Smith on the helmet in the second Test also at Lord’s.

Despite his unavailability for 2022, Archer was still picked up by Indian Premier League franchise Mumbai Indians for the ongoing season.

He played a handful of matches for West Indies Under-19s nine years ago before turning his attention to representing England, the birthplace of his father.