EUGENE, Oregon – Jamaican Stephenie Ann McPherson qualified fastest with a season-best time to lead all seven Caribbean runners, including Olympic champion Shaunae Miller-Uibo, into the semi-finals of the women’s 400 meters at the World Championships here Sunday. 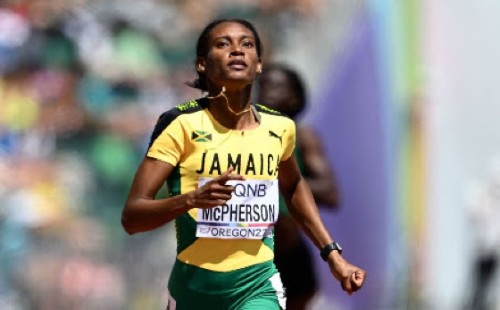 Bahamian Miller-Uibo captured the opening heat in 51.10, beating Guyanese Aliyah Abrams (51.98) into second, and maintaining her bid for a first-ever World title after finishing with silver in Doha in 2019.

Barbadian Sada Williams stopped the clock at 51.05 to win heat four where Jamaican Charokee Young (51.84) finished fourth to also qualify, while Cuba’s Roxana Gómez (51.85) ran third in heat five and Jamaican Candice McLeod (50.76) second in heat six, to also reach the next round.

In the men’s equivalent, former World and Olympic champion Kirani James was one of four Caribbean runners advancing to the next round.

The 29-year-old Grenadian was third fastest overall, clocking 45.29 to be second in heat five with Jamaican Nathon Allen third in 45.61, and Botswana’s Bayapo Ndori taking the line first in a personal best 44.87.

Both the men’s and women’s 400m semi-finals will be run Wednesday with both finals set for Friday.

Sunday’s evening session here, which gets underway at 5:05 pm (8:05 Eastern Caribbean time), will be headlined by the semi-finals and final of the women’s 100 meters.

Double Olympic champion Jamaican Elaine Thompson-Herah is chasing her first-ever World title while compatriot Shelly-Ann Fraser-Price is after her fifth.

The evening will also feature the semi-finals and final of the men’s sprint hurdles, where Olympic champion Jamaican Hansle Parchment is bidding for his first World title.