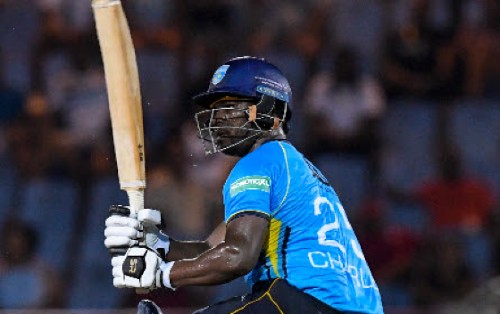 Johnson Charles goes on the attack during his half-century for St Lucia Kings. (Photo courtesy Getty/CPL)In pursuit of 165 at the Daren Sammy Cricket Ground, Kings overhauled their target with a ball to spare, in a finish made unnecessarily anxious by nervy batting at the back end.

Charles top-scored with 62 from 39 deliveries at the top of the order, providing the foundation for the run chase which was then supplemented by knocks of 22 from Roshon Primus and 20 apiece from David Wiese and Tim David.

Kings faced a required run rate of 9-½ over the last five overs but never really found the acceleration, and were forced to scrap to get the nine runs needed from the last over.

All-rounder Raymon Reifer had earlier also struck 62 to guide Tallawahs to 163 for eight off their 20 overs.

The left-hander, batting at number five, arrived at the crease with his side on 47 for three at the end of the sixth over and counted four fours and four sixes in a 41-ball knock.

Sent in, Brandon King (19) and Kennar Lewis (19) put on 38 for the first wicket but it was Reifer who really made the difference as one of only two batsmen to pass 20, Imad Wasim (20) the other.

In reply, Kings slumped to 39 for four in the seventh over but Charles led the recovery, lashing four fours and four sixes in adding 36 for the fifth with David and a further 39 for the sixth wicket with Primus.

When Charles skied left-armer Reifer (2-28) to cover in the 15th over, Primus and Wiese put on 29 for the seventh to keep the run chase alive.