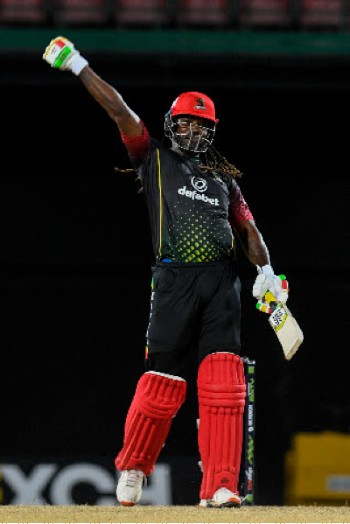 Tournament ambassador Chris Gayle celebrates after hitting the winning runs for St Kitts and Nevis Patriots. (Photo courtesy CPL Media)Chasing a modest 85 under lights, the hosts got home with two balls to spare when the left-handed Gayle whipped a waist-high Ravi Rampaul full toss to the ropes at backward square.

The Jamaican, who turns 43 next month, finished on 15 not out from 16 balls after being dropped twice. He put on 27 in an unbroken fourth wicket stand with Player-of-the-Series Andre Fletcher who struck an unbeaten 27 from 23 balls with two sixes.

“It was definitely meant to be. Congrats to our team,” said Gayle, the tournament’s brand ambassador.

“Trinidad played some good cricket. They have a very great bowling lineup as well. But it was a great final. This is what finals are all about.”

Patriots’ run chase was spearheaded by their captain Evin Lewis who lashed a 16-ball 32, including two fours and three sixes, and posted a critical 53 for the first wicket with Fletcher.

He was the first of of two wickets to fall to pacer Russell (2-11) in the fifth over, Sherfane Rutherford (4) holing out on the ropes at deep mid-wicket.

“I actually feel very special knowing that it’s Chris Gayle’s tournament. We stressed on winning this tournament for him and it’s good to see we went out there and did it,” Lewis said.

Sent in, TKR faltered with the bat, mustering a disappointing 84 from 9.3 overs with New Zealander Tim Seifert top-scoring with an unbeaten 37 from 25 balls, including a four and three sixes, and Andre Russell blasting three sixes in a 13-ball 22.

The pair added 44 for the third wicket to salvage the innings which tottered on six for two in the second over after both openers Sunil Narine (0) and Tion Webster (5) fell cheaply.

When Lewis ran Russell out with a direct hit at the non-striker’s end in the sixth over, Seifert and Terrance Hinds (8) put on a further 28 for the fourth wicket before three wickets tumbled for six runs in the space of 11 deliveries.

“I don’t think we had the start we wanted with the bat. I think we didn’t get sufficient runs,” lamented skipper Narine.

West Indies left-arm seamer Dominic Drakes was the best bowler with two for 17.