KINGSTON, Jamaica – Jamaican sprint queen Elaine Thompson-Herah confirmed on Monday that she has departed from the MVP Track Club, which is headed by renowned coach Stephen Francis. 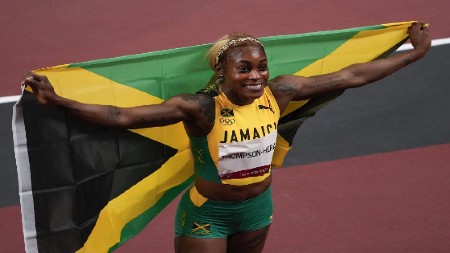 (AP Photo/Charlie Riedel)A media statement from “Team Elaine Thompson-Herah” said she had resumed training for the 2022 season, when she will attempt to win her first individual gold medal at the World Athletics Championships in Eugene, Oregon.

The media statement added the double Olympic champion was still in the process of finalizing her training arrangements, and she was “considering all options available concerning her team”.

“In light of an abundance of requests from my fans and concerned Jamaicans, I want to assure everyone that I have begun my training independently and will continue to do so while I finalize all aspects of my team for the upcoming season,” the media statement said.

“I want to thank everyone for their support and express appreciation to those who have reached out in concern. I remain committed to representing my country and to lead with courage and grace as I am aware that I inspire young women across the world who have dreams and who dare to see those dreams come to pass.”

The media statement came shortly after Thompson-Herah, arguably the fastest woman alive, was conferred with the national honor of Order of Distinction (Commander Class) by the Jamaica government.

Francis coached Thompson-Herah for all her history-making career in which she won double sprint gold medals in the 100 and 200 meters at the 2016 Olympics in Rio de Janeiro and this year’s rescheduled Tokyo Olympics.

In Tokyo, Thompson-Herah became the first woman to defend the 100 and 200 titles at the same Olympics, and she also won gold in the 4×100 relay.

After the Olympics, Thompson-Herah became the first woman to run four legal times under 10.70 in the 100, including a personal best of 10.54, a time bettered only by five hundredths-of-a-second by deceased American track star, Florence Griffith-Joyner.