HAMILTON, Bermuda – Top athletes from the Caribbean left their mark on the televised inaugural USATF Bermuda Games on Saturday, picking up eight victories, as strong headwinds and rain played havoc with times at the Flora Duffy Stadium. 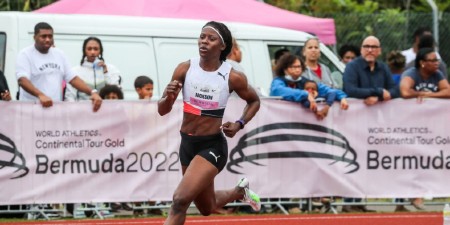 Shericka Jackson, a 100 meters bronze medalist at last year’s Tokyo’s Olympics, took the 400 meters in 51.40 with another Jamaican, Candice McLeod, second in 51.57.

Ricketts got her mark on her third attempt after Metzger had jumped to an early lead on her second effort. 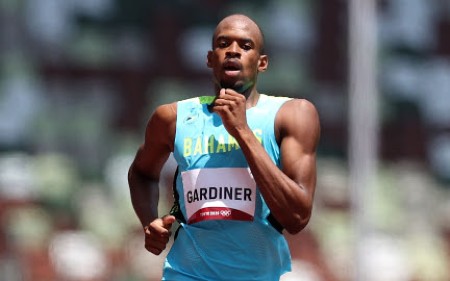 Strachan’s victory came 10 years after she completed the CARIFTA Games sprint double in the same stadium.

“I am excited to be back and repeat what I did back then,” 28-year-old Strachan said afterwards.

“I am satisfied with the performance because it wasn’t really great conditions, but I still came out on top.”

In one of the most exciting finishes of the day, reigning Olympic 400 meters champion Steven Gardiner of the Bahamas outgunned Trinidad and Tobago’s Jereem Richards in the men’s 200 meters.

Gardiner clocked 20.79, a mere seven-hundredths of a second ahead of Richards, with Emmanuel Matadi of Liberia third in 21.04.

“The wind was crazy, but I had to fight,” said Gardiner. “I didn’t get that good of a start, but I just did what I could to get to the line.”

Grenadian star Kirani James romped to victory in the men’s 400 meters in 45.63 ahead of Britain’s Alex Haydock-Wilson in 46.05, with Jamaican Jaheel Hyde third in 46.27.

Puerto Rico’s Olympic champion Jasmine Camacho-Quinn made a winning start to the season by setting a world-leading time of 12.67 in her specialty, the women’s 100 meters hurdles, with American pair Chanel Brissett (13.06) and Christina Clemons (13.15) second and third.

“I was nervous at first, just because of the strong headwind, but I knew what I had to do,” 25-year-old Camacho-Quinn said.

“World lead? I don’t know how to feel about it. I still have other things that I am more focused on, but I will take it.”

Barbadian Shane Brathwaite took advantage of the absence of American Olympic silver medalist Grant Holloway, who pulled out because of the windy conditions, to claim victory in the men’s 110 meters hurdles in 13.78.

American Michael Dickson was second in 13.85 with Eduardo Rodrigues of Brazil third 13.87.

Bermuda’s middle-distance runner Dage Minors brought a big cheer from the large crowd with a third-place finish in the men’s 1,500 meters, crossing the line in three minutes 46.82 seconds to finish behind Kenya’s Kamar Etiang (3:45.26) and Germany’s Amos Bartelsmeyer (3:45.35).

The women’s event was dominated by Americans, Teahna Daniels winning in 11.45, with Gabby Thomas (11.49) and Javianne Oliver (11.62) filling the minor places.