KINGSTON, Jamaica – Superstar sprinter Shelly-Ann Fraser-Pryce believes she can break the world 100 meters record this season as she prepares for her World title defense, and continues to take aim at the Paris 2024 Olympics. 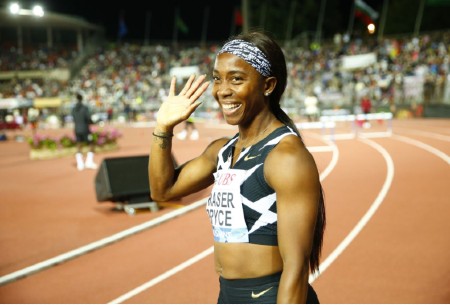 Jamaican sprinter Shelly-Ann Fraser-Pryce. (REUTERS/Denis Balibouse)At age 35, Fraser-Pryce is in the twilight of her career but has shown little sign of decline, copping silver in Tokyo last year behind fellow Jamaican Elaine Thompson-Herah, and already showing good form with a 22.79 seconds run in the Velocity Fest here last weekend.

And while no woman has dipped below 10.50 in 34 years, Fraser-Pryce said she was upbeat about her chances of doing so.

“After having that season last year, it has definitely opened a new door for me in terms of the dreams and the goals that I am chasing for this season,” the Gleaner here quoted her as saying.

“I am definitely looking forward to running 10.5 and possibly 10.4 so that is the aim.

“I think I am on my way to doing that, I just have to continue to trust that God will give me the strength and trust in the coach and just continue to put in the work.”

Fraser-Pryce was one of several international athletes making an appearance last weekend at the National Stadium here, as she finished second in the 200 meters.

She dominated the race from the outset but visibly eased up in the stretch, allowing Bahamian Anthonique Strachan to come through for the win in 22.55.

Fraser-Pryce said she was pleased with the outing and believes it set the right tone for the remainder of the season.

“Once you are training and you are doing well, you set those kind of goals for yourself because it is something that I am attempting,” she explained.

She will defend her World title in Eugene, Oregon in the July 15-24 meet and said managing her workload will be critical to her success.

“As you know, I am looking forward to going to Paris and so I want to make sure that I am very cautious in the amount of races that I run and, of course, the aim is to defend the title in Oregon,” she said.

Fraser-Pryce is the third fastest woman in the world with a personal best 10.60 in the 100 meters.