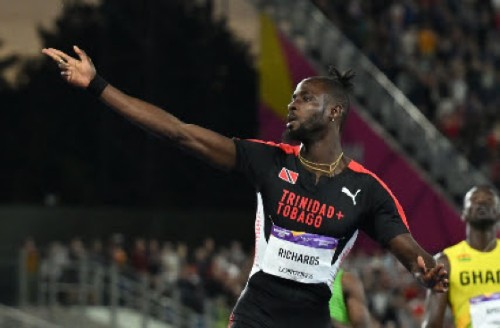 Trinidadian Jereem Richards celebrates after crossing the finish on Saturday.Kyron McMaster of the British Virgin Islands joined the gold spree by winning his 400 meters hurdles final while Janieve Russell led a Jamaican one-two in the corresponding women’s final, to also complete a successful defense of her title and ensure a clean sweep of the event for the Caribbean.

Jamaican Lamara Distin had earlier won the women’s high jump to extend the region’s success on the field and laying the platform for the track results to follow.

Thompson-Herah, who earlier this week landed her first-ever Commonwealth medal when she captured gold in the 100 meters, once again dominated this time in the half-lap final to cross the line first in 22.02 seconds.

Her time eclipsed Bahamian Shaunae Miller-Uibo’s Games record of 22.09 and helped the 30-year-old Jamaican compensate for her disappointing showing at last month’s World Championships in Eugene.

Running out of line seven, Thompson-Herah produced a dominant first 100 meters to lead on the curve and there was never any doubt about the result thereafter.

Nigerian Favour Ofili followed Thompson-Herah over the line for silver in 22.51 while Namibia’s Christine Mboma snatched bronze in 22.80.

“In the 100 meters, I wanted to get that Games record but that didn’t work out – my execution wasn’t great – but I was determined I would get the 200 [record] tonight,” Thompson-Herah said.

“I wanted to go below 22 seconds but the legs got the better of me, but I’m grateful for the championship record.”

Richards, meanwhile, controversially awarded gold at the Commonwealth Games four years ago in Gold Coast, made sure of his top spot this time around, charging to the finish in a time of 19.80 seconds.

In the process, he removed Frankie Fredericks’s 28-year-old mark of 19.97, ironically beating Zharnel Hughes of Great Britain (20.12) into second.

Four years ago, Hughes crossed the line first but was disqualified for impeding the second placed Richards.

“I’ve been on a mission. I was very conservative throughout the rounds and I just wanted to make a statement [in the final],” Richards said.

McMaster, who limped out last month’s World Championships with a niggle, showed little sign of discomfort as he took the line first in 48.93.

The 25-year-old came under sustained pressure from Jaheel Hyde over the first 100 meters but managed to get clear over the last 80 meters, the Jamaican finishing with silver in 49.78.

Russell was timed at 54.14 seconds in winning her final, dragging her teammate Shiann Salmon for silver in 54.47.

Distin was a surprise winner of the high jump, leaping 1.95 meters while teammate Kimberly Williamson took bronze in 1.92, Australian Eleanor Patterson finishing with silver also in 1.92.