MONTERREY, Mexico – The World Cup-bound Reggae Girlz on Monday night ended the 2022 CONCACAF Women’s Championship (CWC) in third place, for the second time in the tournament’s history, thanks to a late goal from Kalyssa Vanzanten in their match against Costa Rica. 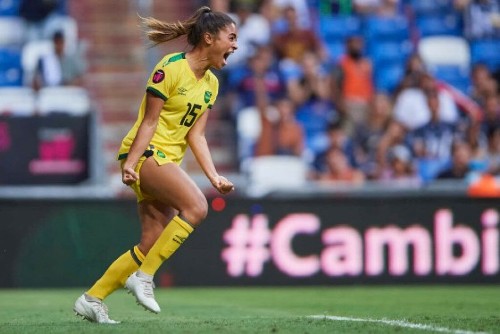 Kalyssa Vanzanten scored the game winner for Jamaica against Costa Rica in the third place match on Monday night at Estadio BBVA. (Photo: CONCACAF)Jamaica, leaving Monterrey World Cup-bound and ready to face the tournament’s runner-up, Canada, in next year’s Olympic play-in, edged out their opponents 1-0 in extra time during the third-place match at the Estadio BBVA.

Both teams started strong, with Costa Rica having the first chance in the third minute, but the star of the Reggae Girlz in this tournament, goalkeeper Rebecca Spencer stopped the shot, sending the ball over the crossbar.

Three minutes later, Las Ticas kept up the momentum when Melissa Herrera had a clear shot, but sent it wide when she was in the area alone in front of Spencer.

The first chance for Jamaica came in the 11th minute when Drew Spence sent in a header, but Costa Rica’s goalkeeper Daniela Solera was ready to keep the score even for both teams.

In the 40th minute, Raquel Rodriguez tried to break open the game for Costa Rica but sent it over the crossbar.

The same happened for the Caribbean side in the 45+1’ when Shaw had a shot to help her team, but couldn’t land a clean effort.

Jamaica’s Trudi Carter nearly gave her side a lead in the 62nd minute, only to see a shot strike the crossbar. The goal post was once again a factor in the 90+2’, as Rodriguez tried to seal the match for Las Ticas, but instead hit the woodwork and was denied the winning goal.

For the first time in the 2022 CWC, a match went to extra time, adding even more emotion to the already tense affair.

The goal finally came in the 102nd minute when Vanzanten, who had subbed on three minutes earlier, scored the first goal of the night with a right-footed finish, putting her team in position for the win.

The excitement went on until the last minutes. In the 117th minute, Fabiola Villalobos had the last chance for Costa Rica, but Spencer was ready to stop her shot to nail down the Jamaican victory.

Jamaica qualified for the 2023 Women’s World Cup after defeating Haiti 4-0 in a must-win game last week.

The United States were the eventual 2022 CWC Champions after downing Canada 1-0 on Monday.