LONDON, UK – Brentford striker Ivan Toney notched his 30th goal of the season on Saturday to equal the English Championship record and help his side secure a third-place finish as they beat runners-up Watford 2-0. 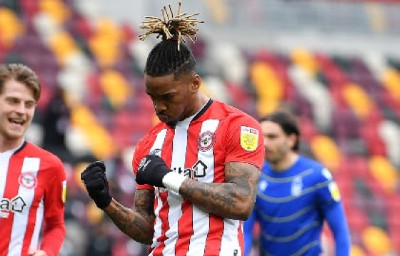 Brentford’s Reggae Boy target, Ivan Toney.Toney, 25, who is of Jamaican descent and was recently linked with a move to join up with the Reggae Boyz, doubled Brentford’s lead when he calmly slotted home from the penalty spot on the hour to draw level with Glenn Murray’s 30-goal record for Crystal Palace in 2013 with a game to go, having been fouled in the box by Francisco Sierralta.

Marcus Forss, who had a goal disallowed in the first half, had put the hosts ahead just 53 seconds after the restart to go ahead, scoring from close range.

The victory ensured a second successive third-placed finish for Brentford, who lost to Fulham in last season’s play-off final.

Their tally of 84 points is three more than they managed last term, but they are four behind Watford, who ensured promotion straight back to the top flight with victory over Millwall last week.

The defeat for Watford saw Norwich confirmed as league champions after the Canaries beat Reading 4-1 at Carrow Road.

In March, it was reported that Toney would be called up to the Jamaican national team as part of a move by the Jamaican Football Federation (JFF) to target a string of English-born players in a bid to improve the Reggae Boyz’ chances of qualifying for next year’s World Cup in Qatar.

JFF president Michael Ricketts claimed Toney was in the process of acquiring a Jamaican passport, but Toney reportedly rejected Jamaica’s call, saying he still harbored an ambition to represent England, where he was born.

Sinclair, whose 49-year-old father Frank made 28 appearances for the Reggae Boyz between 1998 and 2003, broke through on 12 minutes, slotting home low from the left from Jamie Reid’s pass after George Maris had won the ball.

With the Gulls brushing aside Eastleigh, Sutton stayed one point behind as the automatic promotion race continued.

Wilson, 24, volleyed Sutton in front in the eighth minute with his third goal in four games.

North of the border, Jay Emmanuel-Thomas, a 30-year-old forward of St Lucian and Dominican descent, was on target for Livingston, but visitors Aberdeen secured European football for next season as a 2-1 victory guaranteed them a top-four Scottish Premiership finish.

Callum Hendry and Ryan Hedges put Aberdeen two up after going in 0-0 at the break, but Emmanuel-Thomas’ brilliant first-time volley on 80 minutes – his ninth goal this term – made for a nervy ending for the visitors, who will compete in the Europa Conference League next term.

Aberdeen are 12 points clear of Livingston, who drop to sixth after a run of seven defeats in 10 matches.