AUSTIN, Texas – Jamaica Reggae Boyz suffered another huge setback in their bid to reach the 2022 FIFA World Cup in Qatar, when Ricardo Pepi scored twice in the second half to give the United States a 2-0 victory in their CONCACAF qualifier on Thursday. 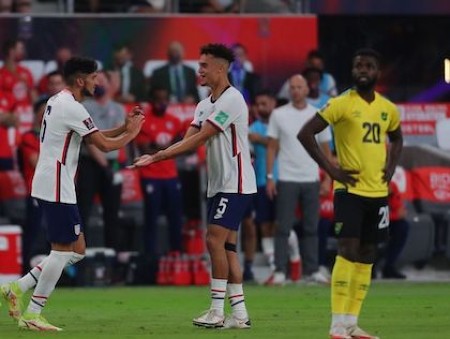 Ricardo Pepi (left) celebrates with teammate Antonee Robinson (center) to the bewilderment of Jamaican defender Kemar Lawrence. (USMNT photo)The Jamaicans entered the match with only one point from their previous three matches in the final round of CONCACAF qualification and desperately needing a win to boost their confidence and their chances.

With their preparations disrupted after a slew of late withdrawals, including Michail Antonio, who plays for West Ham United in the English Premier League, the Reggae Boyz did well to keep the Americans at bay in the first half and the score level 0-0 at the half-time whistle.

But Pepi, 18, who decided just before the start of qualifying to play for the U.S. over Mexico, shattered the spirit of Theodore Whitmore’s side before a vocal crowd of 20,500 with goals in the 49th and 62nd minutes to give the Americans their first home win.

The U.S. now have eight points in four matches to hold onto their spot in the top three, which will automatically qualify for the World Cup.

They travel to Panama for their next match on Sunday, at the same time the Jamaicans host Canada at the National Stadium in Kingston.

The Boyz were fortunate that Grenadian referee Reon Radix was twice lenient in the first half and waved off what appeared to be two clear penalty shouts from the Americans, but neither team had a breakthrough and the match remained goalless at the break.

The first goal came after midfielder Yunus Musah played the ball wide to Sergino Dest, whose one-time cross found Pepi lurking just outside the six-yard box and the FC Dallas striker broke away from defender Damion Lowe and headed the ball to the right of Jamaican goalie Andre Blake.

The second goal was a similar play with Brendan Aaronson crossing on the turf for the on-rushing Pepi to re-direct the ball past Blake with a right-footed shot.