TORONTO, Canada – Two goals on either side of half-time condemned already-eliminated Jamaica’s Reggae Boyz to a chastening 4-0 drubbing at the hands of Canada in their penultimate game of the 2022 FIFA World Cup qualifiers. 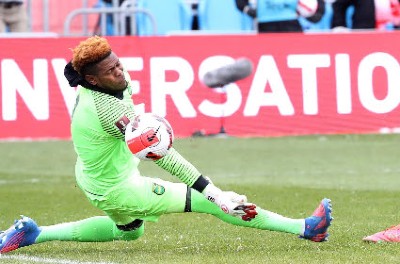 Reggae Boyz goalkeeper Andre Blake is powerless to prevent Canada’s first goal on Sunday.Hoping to build on an impressive 1-1 draw with El Salvador four days ago in Kingston, the Caribbean side were brought quickly back down to earth as Cyle Larin and Tajon Buchanan fired the hosts ahead before the break and Junior Hoillet, along with an Adrian Mariappa own goal, sealed their fate here Sunday.

The result left Jamaica with their seventh defeat from 13 games and one from bottom of the eight-nation third round while Canada, in contrast, qualified for a World Cup for the first time in 37 years.

“I think we didn’t really come out ready to play. We got started very slowly, we were under attack especially down the right-hand side and Canada showed they were really after trying to win the game,” said Reggae Boyz head coach Paul Hall.

“I thought it took us a lot of time to try to get into the game and I think the [first] goal really knocked the air out of our sails.

“You can’t give a team like that a head start because you’ll never get it back because they’re a good team. To be honest, I don’t think they were four goals better than us but there were some positives.”

Jamaica came under assault from the first whistle and were forced to repel several attacks before they predictably went behind in the 13th minute when Larin opened the scoring.

Hoilett squared from the left to Stephen Eustaquio whose through ball split the Jamaica defense for Larin to finish from eight yards out.

Moments later, Jamaica were left off the hook when Jonathan David shot narrowly wide after being set up by Larin and the Caribbean powerhouses were reprieved yet again on 21 minutes when an unmarked Buchanan blazed over the crossbar following brilliant set-up play by Hoilett and Samuel Adekugbe.

Another hatful of chances followed for the dominant Canadians before they finally doubled their lead on the stroke of half-time, David chipping into the box following Eustaquio’s free kick and Buchanan turning in from close range.

The game was all over as a contest at this stage but Canada remained unrelenting.

Buchanan muffed a close range chance in the 48th, David missed another from the six-yard box in the 49th before substitute Lucas Cavallini was denied from the edge of the six-yard box by Blake in the 81st minute.

But the third came seconds later when Buchanan set up Hoilett for a 12-yard finish before Mariappa put the ball into his own net at the near post in the dying stages, attempting to clear Adekugbe’s squared pass.

Jamaica return home on Wednesday to take on Honduras in their final game.