MIAMI, Florida – Jamaica Reggae Boyz ended the search for their first win in the final round of Concacaf qualification for the FIFA World Cup 2022 Qatar in style with a historic 2-0 win over Honduras on Wednesday. 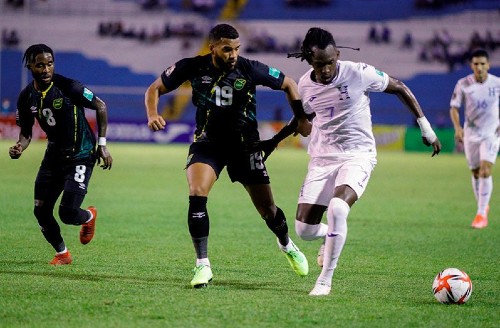 Adrian Mariappa (Left) of Jamaica and Alberth Elis of Honduras battle for possession during a Concacaf World Cup qualifier match at Estadio Olimpico, Honduras on October 13, 2021.Mexico remained on the top of standings with a 2-0 win over El Salvador, a string of second goal carried Canada past Panama 4-1 and the United States grabbed a 2-1 win over Costa Rica in the other matches.

The results meant that the Jamaicans have five points and have moved out of the basement of the standings to sixth ahead of El Salvador thanks to goal difference, and the Hondurans, on three points.

The Mexicans still lead the table with 14 points with the Americans in second on 11, the Canadians in third on 10 followed by the Panamanians on eight and Costa Rica on six.

The top three teams from the Concacaf qualifiers move directly into the World Cup and the fourth-placed team enters an intercontinental playoff for another shot to reach Qatar 2022.

In San Pedro Sula, Honduras: Kemar Roofe and Oniel Fisher scored on either side of halftime and revived the hopes of Theodore Whitmore’s side, as the Jamaicans landed their first win on Honduran soil at the Estadio Olimpico Metropolitano.

Roofe, who plays for Scottish Premiership giants Rangers, scored his debut goal for the Reggae Boyz in the 38th minute when he redirected a shot from inside the box by Shamar Nicholson past Honduras goalkeeper Luis Lopez to give the visitors the lead.

Jamaica goalkeeper Andre Blake and his defense held firm under wave after wave of attacks from the Hondurans before Fisher, who plays for the Los Angeles Galaxy in Major League Soccer in the U.S., doubled the Reggae Boyz’s lead in the 80th minutes.

The on-rushing center back met a pass, charged into the Honduran box, and took a hard shot that beat a despairing dive from Lopez.

In San Salvador, El Salvador: Mexico found the opening goal at the Estadio Cuscatlan in the 31st minute when Hector Moreno headed in a goal from a corner kick and Raul Jimenez, who came off the bench in the 63rd minute, finished things off by scoring a penalty in stoppage time, after he was brought down in the box.

In Columbus, Ohio (USA): The Americans rallied from a goal down inside two minutes at Lower.com Field to win after Sergiño Dest set up Timothy Weah, whose shot ricocheted off Leonel Moreira, hit the post and dribbled past Costa Rican goalkeeper Kaylor Navas in the 66th minute.

Keysher Fuller gave the visitors the early lead when he volleyed a cross from Ronald Matarrita past U.S. goalie Zack Steffen before Dest drew the Americans level in the 25th minute with a left-footed bullet past Navas from just outside the box.

In Toronto, Canada: Canada conceded early when Rolando Blackburn scored his third goal in the final round of World Cup qualification after five minutes at BMO Field, connecting on a low cross from Michael Murillo.

But the Canadians got the equalizer before the half when Murillo sent a header into his own goal from an Alphonso Davies corner kick.

Canada added three goals in the second half from Davies, Tajon Buchanan and Jonathan David.

Davies finished a solo effort with a left-footed shot in the 66th minute, Buchanan rose in the middle of the box to nod in service from Richie Laryea in the 71st minute and David directed a long cross from Davies toward the back post to round out the scoring in the 78th minute.