LONDON, UK – Reggae Boys Andre Gray and Kemar Roofe both found the target in contrasting results for their sides while Jamaican striker Jamille Matt sent Forest Green Rovers back to the top of England’s League Two with a second-half strike on Saturday. 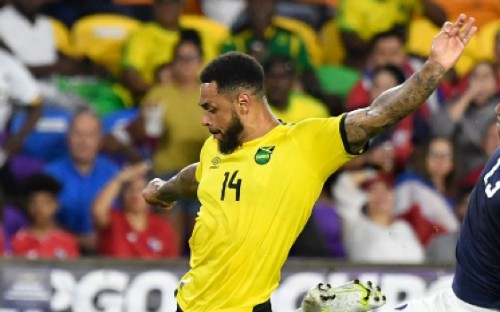 Reggae Boy Andre Gray.While Matt’s 77th-minute header earned the Gloucestershire outfit a 1-0 home win over Northampton Town, Gray’s strike for Queens Park Rangers (QPR) was only enough to earn them a 3-3 draw with Reading in the Championship.

St Kitts and Nevis defender Michael Nottingham was also on target for Accrington Stanley in a losing cause but Reggae Boy Michail Antonio got his marching orders late on for West Ham in a goalless Premier League draw at Southampton following a second yellow while Stevenage’s Guyana international Terence Vancooten also saw red.

Forest Green grabbed the only goal when Nicky Cadden arrowed the ball into the box for Matt to send a cushioned header beyond goalkeeper Liam Roberts for his fifth goal of the season, having been the club’s top scorer with 17 last season despite being sidelined with a serious hand injury for two months.

Matt, 31, had almost given the hosts the lead with 23 minutes to go as Roberts parried a well-struck shot from Kane Wilson straight to the Jamaican, but his stabbed attempt was spectacularly cleared off the line by Aaron McGowan.

Gray, 30, on loan from Watford, pulled a goal back for QPR in the 79th minute after they trailed 3-1 away at the Madejski Stadium where John Swift bagged a hat-trick for the Royals. The visitors grabbed an injury-time equalizer from Stefan Johansen, the fourth-placed Londoners earning a point to maintain their unbeaten start to the Championship season.

In the Scottish Premiership, Roofe, 28, who made his debut for the Reggae Boys in a 3-0 defeat against Panama in a World Cup qualifier last week, rifled home a 58th-minute spot-kick after Rangers went behind seven minutes earlier to St Johnstone.

A 79th-minute strike from James Tavernier then earned the champions all three points.

In League One, sixth-placed Accrington Stanley trailed early at Sunderland, but got back into the game on 30 minutes when Sean McConville’s corner was met beautifully by 32-year-old Nottingham, who rose highest and powered his header into the top corner.

However, leaders Sunderland went on to win the game 2-1 when former Forest Green captain Carl Winchester scored his second goal of the season.

Antonio, who also made his debut for Jamaica last week, was sent off after being shown a second yellow card for a rash challenge on Moussa Djenepo in second-half stoppage time at Southampton, as West Ham stretched their unbeaten Premier League start to four matches.

“[He] had been booked for the first one. You just don’t make any more challenges and give the referee a decision to make. My feeling was from where I was, it was probably a booking and he got sent off for it,” West Ham manager David Moyes said of Antonio’s red card.

Defender Vancooten, 23, who made his debut for the Jaguars in 2017, was sent off for handling in the box in the 61st minute in a League Two match at Sutton United.

Elliott List had given the visitors the lead in the 55th minute before Richie Bennett equalized three minutes later and then doubled his tally from the spot after Vancooten’s dismissal.