LONDON, UK – Reggae Boy winger Leon Bailey has played down injury fears after limping off following a brilliant 21-minute cameo in which he scored with a thunderous shot that wrapped up Aston Villa’s 3-0 English Premier League win over Everton. 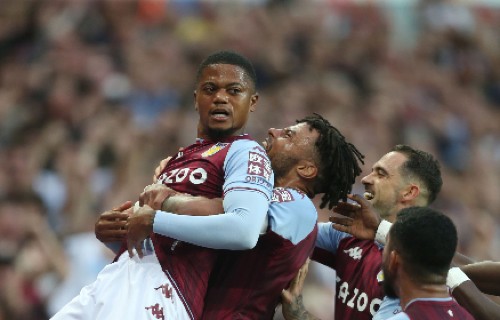 He was substituted on 82 minutes with a niggle.

“I think it [injury] was from the shot. I think I hit it too hard!” Bailey said afterwards.

“I started feeling a little bit stiff in my quad, but I don’t think it’s anything too serious.”

He added: “It means so much to me at what I accomplished in 21 minutes.  The fans were amazing. It was a perfect night.

“In the moment, I said I’m just going to smash the ball. It’s such a great feeling – I can’t even explain it.”

Bailey was shown a yellow card after his celebrations included removing his shirt and displaying a tribute to Jamaican social media influencer Steffie Gregg, who died aged 26 in August from COVID-19 complications.

The three goals came in a nine-minute spell that ended Everton’s unbeaten start to the season.

The game sprang to life in the 66th minute after a lackluster first half when Villa full-back Matty Cash fired past stand-in Everton goalkeeper Asmir Begovic for his first Premier League goal.

The Toffees conceded again three minutes later as Bailey’s corner was headed into his own net by Lucas Digne at the near post.

Bailey added the third after showing great composure to head the ball down before lashing it into the roof of the net.

Dean Smith’s side moved up to 10th in the table after their second victory of the campaign.