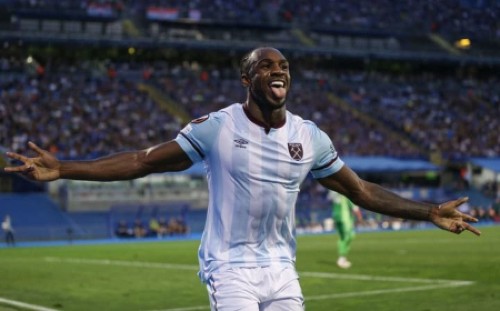 Reggae Boy Michail Antonio celebrates his goal in Europe on Thursday.Too fast and strong for his markers, Antonio, 31, latched on to a woefully underhit backpass from Kevin Theophile-Catherine to round home goalkeeper Dominik Livakovic and slip the ball into an empty net on 21 minutes.

Roared on by about 2 000 visiting fans inside the Stadion Maksimir, the Hammers doubled their lead against the Croatian champions five minutes after the break when England midfielder Declan Rice scored a superb goal on his 150th appearance for the club.

“Quick flight over for a game in Europe, points in the suitcase, now it’s time to head back home with them,” Antonio said on his social media site afterwards. “What a night.”

The UK-born Antonio made his debut for Jamaica earlier this month in a 3-0 thrashing at the hands of Panama in a 2022 World Cup qualifier in Kingston.

Aside from Europa qualifiers, the double strike ensured a first victory in Europe for West Ham since 1999 and vindicated manager David Moyes’ decision to introduce several players into his starting XI for the first time this season.

Kurt Zouma and Nikola Vlasic both played well on their full debuts for the club, while 28-year-old right-back Ryan Fredericks, who is eligible to play for Guyana, Manuel Lanzini and Issa Diop all seemed up to speed on their first starts of the season.

“Zagreb have a really good history in European football so I knew it was going to be a tough game and the players were made aware of that,” Moyes said.

The Hammers are joined at the top of Group H by Genk, who scored a stoppage-time winner at Rapid Vienna.

Kemar Roofe, 28, who made his Reggae Boyz debut with Antonio against Panama, was unable to prevent Scottish champions Rangers slipping to a 2-0 defeat against classy French side Lyon in a Europa League Group A match at a packed Ibrox after coming on as a substitute on 70 minutes.

The defeat was Rangers’ fourth in their opening 11 games across all competitions this season, and ended a 10-match unbeaten run in the Europa League group stage.