Powell Looking to Cement Spot in Wake of Poor CPL

Rovman Powell says he has put his disappointing Caribbean Premier League campaign behind him and is firmly focused on scoring heavily against New Zealand and cementing his place in the West Indies side. 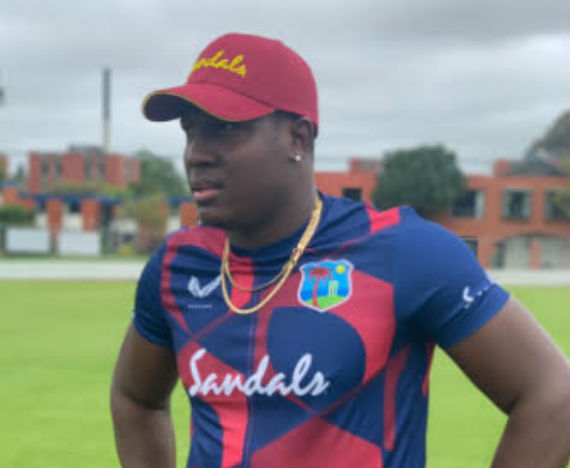 West Indies all-rounder Rovman Powell listens intently during training on the current tour of New Zealand.The attacking right-hander scraped 106 runs from 10 innings for Jamaica Tallawahs last September but still managed to maintain his place in the 14-man squad for the three-match Twenty20 series from November 27-30 in Auckland and Mount Maunganui.

“It’s an important tour not just for the West Indies team but also for me,” said the 27-year-old.

“[I did not score] a lot of runs in the CPL – that is behind me. It was a difficult competition for me but there are brighter things now.

“There are three Twenty20 games that I’m looking forward to so hopefully I can put my best foot forward with quality training sessions leading up to these games.”

Powell is one of the more experienced players on tour especially in the absence of the veterans like Chris Gayle, Dwayne Bravo, Sunil Narine, Lendl Simmons and Andre Russell, all of whom are missing through varying reasons.

He has played 26 T20 Internationals and struck two half-centuries and joins captain Kieron Pollard and Andre Fletcher as the seasoned campaigners in the unit.

West Indies will be gunning for their first-ever T20 series win in New Zealand and Powell said the side was energized by the prospect.

“I think this squad can turn it around. New Zealand hasn’t been an easy place, not just for us but for other overseas teams to tour,” the Jamaican pointed out.

“But if you look on the depth and strength of the squad, I think it’s a pretty good one.

“The captain and coach (Phil Simmons) have stressed on the brand of cricket we want to play leading up to the World Cup [next year] and all of the guys are buying into that brand of cricket and I think it will bear fruit.”

And Powell believes that even without the presence of the plethora of seasoned T20 stars, West Indies can still provide the Black Caps with stiff opposition.

“I think it’s a very good and a very strong team in regards to power-hitting, even with those guys being missing,” he explained.

“What that does is that it provides an opportunity for us as younger players just before the start of the World Cup in 2021 to put our best foot forward and put good performances in place and hopefully that will carry us in good stead.”