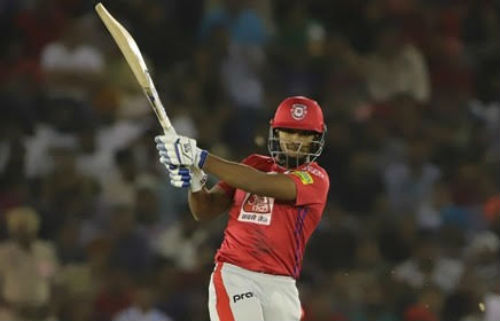 Left-hander Nicholas Pooran.With Kings XI chasing 165 for victory at the Dubai International Stadium following opener Shikhar Dhawan’s second successive unbeaten hundred, Pooran stepped up to top score with 53 off 28 deliveries to inspire his side to their third win on the trot with an entire over to spare.

Pooran struck half-dozen fours and three sixes and received support from Australian Glenn Maxwell who made 32 from 24 deliveries and veteran West Indies opener Chris Gayle who made 29 from just 13 deliveries.

Left-hander Dhawan had earlier snatched the spotlight with a quite brilliant unbeaten 106 from 61 deliveries as Capitals tallied 164 for five off their 20 overs.

He struck a dozen fours and three sixes but such was his dominance that no other batsman managed to pass 14.

Dhawan lost Prithvi Shaw cheaply for seven in the fourth over but put on 48 for the second wicket with captain Shreyas Iyer (14), 33 for the third with Rishabh Pant (14) and a further 35 for the fourth with Australian Marcus Stoinis (9), to keep the innings afloat.

Hetmyer made just 10 after arriving at the crease in the 18th over, and blasted a single six before being yorked off the final ball of the innings by pacer Mohammed Shami (2-28).

The 41-year-old Gayle slammed three fours and two sixes but was one one of two wickets to perish in the sixth over, bowled hitting across at a straight one from off-spinner Ravi Ashwin.

Stumbling on 56 for three, Kings XI were rescued by Pooran who anchored a critical 69-run fourth wicket stand with Maxwell to put them in sight of their target.

When Pooran gloved a short one from South African seamer Kagiso Rabada (2-27) behind in the 13th over and Maxwell followed a few overs later, Kings XI were stumbling again but New Zealander Jimmy Neesham (10 not out) saw off the danger, ending the game with a six over mid-wicket off Australian left-arm seamer Daniel Sams.

With the victory, Kings XI have moved up to fifth on eight points with Capitals remaining top on 14 points.