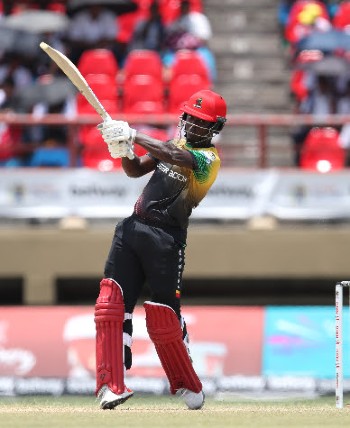 Sherfane Rutherford hits out during his 78 against TKR on Thursday. (Photo courtesy Getty/CPL)Opting to bat first at the Guyana National Stadium, Patriots rallied to 163 for six courtesy of Sherfane Rutherford’s 78 from 50 balls, and then limited TKR to 156 for seven, despite New Zealander Tim Seifert’s 59 from 47 deliveries.

Left-arm speedster Sheldon Cottrell spearheaded the attack with three for 33 – including the wicket of the dangerous Andre Russell for a 17-ball 29 – while off-spinner Kevin Sinclair (2-18) and captain and medium pacer Dwayne Bravo (2-46) chipped in with a brace of wickets apiece.

The result took Patriots to fourth on eight points and they will now have a nervous wait on the results of the remaining matches before knowing their fate.

“It was a good win. I’m happy with the team effort. We see this team (TKR) as the best team in the tournament, regardless of where they are in the table so it’s a game we gear up ourselves for,” said Bravo.

“It didn’t matter where we stood in the table, we wanted to come out and give a hundred per cent and tick all boxes, and I think the boys did that today.”

TKR, meanwhile, slumped to their fifth loss in nine outings to be one from bottom of the six-team league with seven points, and now face a must-win scenario in their last game on Saturday against hosts Guyana Amazon Warriors.

“And we’ve just got to stand up let ourselves be counted so let’s see what happen on Saturday.”

When Patriots stumbled to 28 for three in the ninth over, they seemed condemned to yet another loss and an exit from playoff contention.

But Rutherford rescued the innings by anchoring two successive-fifty run stands – first adding 66 for the fourth wicket with Darren Bravo (23) and then putting on a further 57 for the fifth wicket with South African Dewald Brevis who clobbered five sixes in an unbeaten 30 from only six balls.

In reply, TKR slipped to 22 for two in the fourth over before Seifert, who counted four fours and three sixes, posted a critical 57 for the third wicket with Pollard who belted three sixes in a slow 31 from 36 balls.

Seifert added a further 26 for the fourth wicket with Nicholas Pooran (15) and 25 for the fifth with Russell who flexed his arms with two fours and two sixes in a cameo.

Once Seifert skied Bravo to the ’keeper at the start of the penultimate over with 34 runs required, Patriots edged ahead and took control of the encounter.