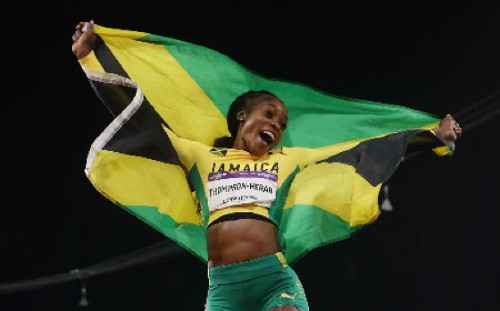 Great Britain’s Darryl Neita claimed bronze in 11.07 after recovering from a poor start.

Thompson-Herah started strongly but came under pressure from Alfred in lane six, before holding her nerve over the last 30 meters.

“I feel good. I could have had a better execution but I am still grateful to win my first Commonwealth title,” said Thompson-Herah, who swept the sprints at the 2016 Rio Olympics and last year’s Olympiad in Tokyo.

Bahamian Tynia Gaither was second from last in 11.23 seconds while Jamaican Natalliah Whyte was last in 11.32.

Meanwhile, Kenyan Ferdinand Omanyala won the men’s final in 10.02 seconds, the Caribbean missing out on a presence after several disappointing results in the semi-finals.

Jamaican Kemar Bailey-Cole was fourth in semi-final two in 10.25, Trinidadian Jerod Elcock was sixth in 10.38 while Nadale Buntin of St Kitts and Nevis (10.51) was last, all failing to advance.

Trinidadian Kion Benjamin (10.43) and St Lucian Stephan Charles (10.53) brought up the rear in the last semi-final.

In the field, Jamaica tasted more success when Danniel Thomas-Dodd copped silver in the women’s shot put, throwing a distance of 18.98 meters.

Canada’s Sarah Mitton took gold by measuring 19.03 while New Zealand’s Maddison-Lee Wesche had to settle for bronze in 18.84.

The women’s corresponding event was highlighted by Barbadian Sada Williams, the World Championships bronze medalist capturing heat three in 51.66 to be one of three runners from the region advancing to the semi-finals.