HAMILTON, Bermuda – Top triathlete Dame Flora Duffy is to lead a provisional 10-strong team at this summer’s Commonwealth Games in the English Midlands city of Birmingham, the Bermuda Olympic Association has announced. 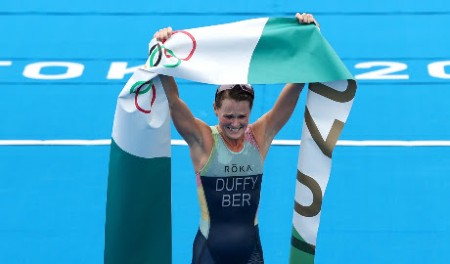 Bermuda Olympic star Flora Duffy.Duffy, 34, won the women’s triathlon gold medal at the 2018 Commonwealth Games in Australia before capping a glittering career by storming to victory at last year’s Olympic Games in Tokyo.

She will be joined in Birmingham by fellow triathletes Tyler Butterfield, Tyler Smith and Erica Hawley, who will compete in individual competition as well as the mixed relay.

Other team members include young track star Caitlyn Bobb, who picked up two bronze medals at the recent CARIFTA Games in Jamaica, where she placed third in the Under-20 400 metres and 4×400 meters relay.

Jumpers Jah-Nhai Perinchief and Sakari Famous join Bobb on the track and field team, while swimmers Madelyn Moore and Emma Harvey and cyclist Caitlin Conyers, have also made the squad.

Final selections have yet to be made for men’s cycling and men’s swimming, and qualification will continue in several other sports over the coming weeks ahead of the July 28 to August 8 Games.

“I just really hope that we keep building on the momentum of this success and have more and more individuals performing on the world stage, whether that is at the World Championships, Olympic Games or the Commonwealth Games coming up,” Duffy said after recently winning a ninth Bermuda Female Athlete-of-the-Year award recently.

Donna Raynor, who will be Bermuda’s chef de mission in Birmingham, told the Royal Gazette newspaper: “I have recently returned from Birmingham … while there, I was able to tour the multiple villages and competition arenas.

“Preparations are going well, and the two refurbished competition arenas for aquatics and athletics are near completion.

“Birmingham is ready to welcome the athletes and officials. I am excited and looking forward to our athletes competing, and, based on their performances during the last few weeks, I have no doubt they will represent Bermuda well.”

More than 5,000 athletes from an estimated 72 Commonwealth nations are expected to compete in Birmingham, which stepped in after Durban, South Africa withdrew because of financial issues.

The Games have twice previously been staged in England – Manchester in 2002 and London in 1934.