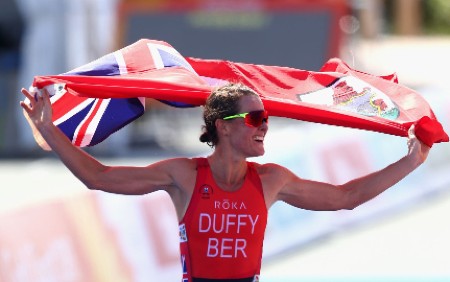 Newly-crowned Olympic champion, Flora Duffy.Duffy, 33, who held the world title in 2016 and 2017 before a serious foot injury forced her onto the sidelines, won Bermuda’s first Olympic gold medal – and only second medal overall – when she demolished a top-class field in Tokyo last month to fulfil a lifelong dream.

She admitted to being “super-pumped” after Saturday’s race, finishing seven seconds clear of her nearest rival, which put her back on top of the standings with one race to come in the series.

“That was incredibly brutal but it was really exciting to do something different,” said Duffy, reflecting on the new format in which 30 triathletes contested three super-sprint races.

The slowest 10 finishers were cut after the first and second races, making tactics and conservation of energy crucial.

“I’ve never done this style of racing and I think for me at this stage in my career where it is something new and makes me nervous is quite nice and kept things exciting.

“As the rounds went on, I felt better and I certainly felt better than yesterday [qualifier], which was a shock to the system. I haven’t done much since the Olympics and so that opened my body up.

“On that last two kilometers I just gave it all I had and I’m super-pumped to take the win. It feels good to be on top of this podium.”

Duffy got off to a strong start and exited the water from the 300-metre swim in third place, in four minutes, four seconds, along with the Americans Spivey and Knibb.

The trio remained together throughout the three-lap 7.2-kilometre cycle, finishing with 16:01 on the clock to set up an exciting climax on the two-lap two-kilometer run.

However, heading into the final lap of the run, Duffy made her move, breaking away to open up a commanding gap before crossing the line in a winning time of 23:07.

Knibb secured second place in 23:14, ahead of compatriot Spivey (23.24) to complete the podium places.

With the 1,000 points on offer, Duffy moved above Maya Kingma of the Netherlands, who was not competing in Montreal, and top of the standings ahead of the championship finals in Edmonton, Canada on Friday.