MIAMI, Florida – Concacaf unveiled on Tuesday, a major expansion of its Champions League as part of a new calendar of regional club competitions. 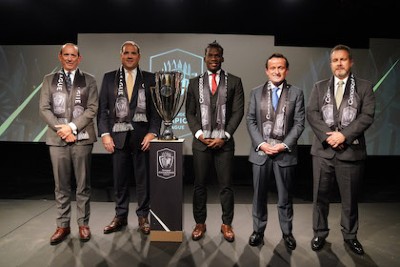 Concacaf president Victor Montigliani (second from left) is flanked by other Concacaf officials during the launch of the new Champions League format – Concacaf photo.Starting with the 2024 edition, the Concacaf Champions League (CCL) will be expanded to 27 participating clubs – including three from the Caribbean – and additional knockout rounds.

Three regional cup competitions – including a Caribbean Cup – will take place before the final five rounds of the CCL are contested in a new ecosystem, which the governing body said, “will deliver more official regional club football that fans want to see”.

“This is a hugely significant development for Concacaf and for leagues and clubs in our region,” Concacaf president Victor Montagliani said. “The CCL has consistently grown in recent years and this new format will provide a major boost to the competition.

“Working collaboratively with our stakeholders, we have been able to create a new calendar that grows and enhances our CCL and fully incorporates regional cup competitions.”

Montagliani added: “This will elevate clubs and leagues from Concacaf and provide even more compelling regional rivalries.

“It will also provide more international relevance to our club competitions, and a very competitive pathway as clubs strive to qualify for the FIFA Club World Cup and succeed on the global stage.”

From 2023 onwards, the three regional cup competitions will be played in the fall of each year and will qualify clubs into the CCL.

Following the conclusion of the three cup competitions, an expanded CCL will be played in the spring to crown the region’s best club.

Under this format of regional cup competitions, each of the Concacaf regions – North America, Central America and the Caribbean – will be able to crown their own champions before the CCL, which will see clubs play to win the confederation’s club title and qualify to the FIFA Club World Cup.

The CCL will continue to be played in a direct elimination knockout stage format and will be composed of five rounds.

The first four stages will include home and away matches, while the final will be played as a single leg match on a weekend date.

Of the 27 clubs that will participate, 22 will begin play in the first round and five will receive a bye to the round of 16.

For the Caribbean, clubs will qualify through a new Caribbean Cup that will include a group stage and a knockout stage.

At the conclusion of the Caribbean Cup, three clubs will qualify for the CCL, with second and third entering the first round and the champion entering at the round of 16 (second round).

The 10 clubs that will participate in the Caribbean Cup will be determined by domestic league play for the professional Caribbean leagues and the new CFU Cup.

Concacaf said more details on the new Caribbean Cup will be communicated in due course.

“The current format of the CCL will remain in place for the 2022 and 2023 editions,” the Concacaf website said. “In 2023, it will be a transition year with the last edition under the current format played in the spring, prior to the new regional cup competitions commencing in the fall.”

The final of the 2021 CCL between CF Monterrey and Club America is scheduled to be played at BBVA Stadium in Houston, Texas.

The winner will replace Tigres UANL of Mexico as the Concacaf’s champion and will represent the confederation at the 2021 FIFA Club World Cup to be played later this year.