GROS ISLET, St Lucia – Teenaged fast bowler Jayden Seales has confessed to having “a bit of nerves” on his Test debut but said claiming his first Test wicket was “an amazing feeling”, following an impressive display on the opening day of the first Test against South Africa here Thursday. 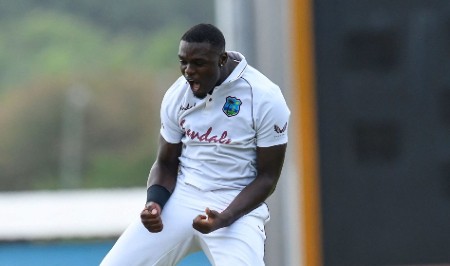 Debutant fast bowler Jayden Seales celebrates a wicket on day one of the opening Test against South Africa on Thursday.The 19-year-old finished with three for 34 as West Indies hit back after being rolled over for an historic low of 97, reducing South Africa to 128 for four in their first innings – a lead of only 31 runs heading into Friday’s second day at the Daren Sammy National Stadium.

“Obviously there was a bit of nerves being able to represent West Indies Test team for the first time so I had a bit of nerves there,” Seales said following the day’s play.

The Trinidadian, selected without a single regional first-class game to his name, claimed his first wicket with the last ball of his first over – the second after tea – when he found debutant Keegan Petersen’s (19) edge for former captain Jason Holder to snare a regulation catch at second slip.

He returned later in the evening with South Africa in cruise control at 113 for two, to account for top-scorer Aiden Markram for 60 and debutant Kyle Verreynne (6) in successive overs.

“That was an amazing feeling,” Seales said in reference to removing Petersen for his first wicket.

“From the time he edged the ball I knew he was out because Jason is very safe in slips, so I was just celebrating from the time it hit the edge.”

Seales said his first day in international cricket had been a major learning curve.

“[I learned] just to remain as consistent as possible, try and create pressure, don’t try anything different and I will get wickets,” he noted.

But with South Africa only 31 runs ahead and four wickets down, Seales believes West Indies can still rebound in the contest.

“I don’t think we’re out of the game. Today is just the first day. We didn’t bat as well as we wanted to but I think we pulled it back pretty well with the ball.”