TOKYO, Japan – Bermudian wheelchair sprinter Jessica Lewis has spoken of her heartbreak after finishing fourth in the women’s T53 100 meters at the Tokyo 2020 Paralympics, missing out on her first medal by a whisker. 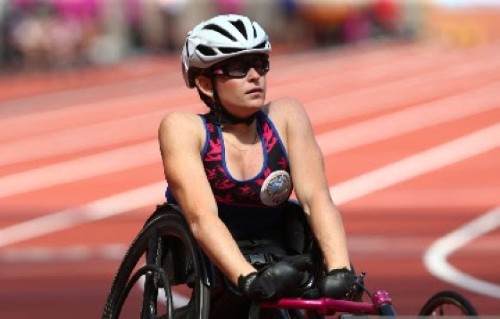 Bermudian wheelchair sprinter Jessica Lewis.Lewis, 28, who competed at the two previous Paralympics, clocked 16.90 seconds in Wednesday’s race to place less than four-tenths of a second out of the medals.

The podium was dominated by the Chinese, with Goa Fang taking the gold in 16.29 and Zhou Hongzhuan the silver in 16.48.

The third spot was claimed by Samantha Kinghorn of Britain in 16.53.

“I have a lot of mixed emotions,” Lewis said. “Fourth place is always hard to take because you know you were so close to a medal.

“It’s definitely hard to take. When you’ve trained so hard for five years and then to just miss out on a medal is heartbreaking.

“I felt like I started well and was good in the transition, but I just didn’t have enough power late on. I raced both the Chinese girls in 2019 and so I wasn’t surprised by them, I knew they would be really fast.

“I felt as if I was right in the mix and I know it comes down to such small margins in these sort of races. Five years of hard work to get here and it comes down to just 16 seconds of a race; it is what it is.”

Despite her obvious disappointment, Lewis is determined to focus on the positive aspects of her performance, having improved by two places from her previous Paralympic outing in Rio de Janeiro in 2016, when she finished sixth in a time of 17.25.

Lewis, Bermuda’s only competitor at the Games, completes her three-event program in the 400 meters on Thursday.

Lewis went into the 100 upbeat despite earlier missing out on a place in the final of the T53 800 meters after finishing last of six in her heat in a time of one minute 57.77 seconds – a personal-best time which knocked almost half a second off her previous best.